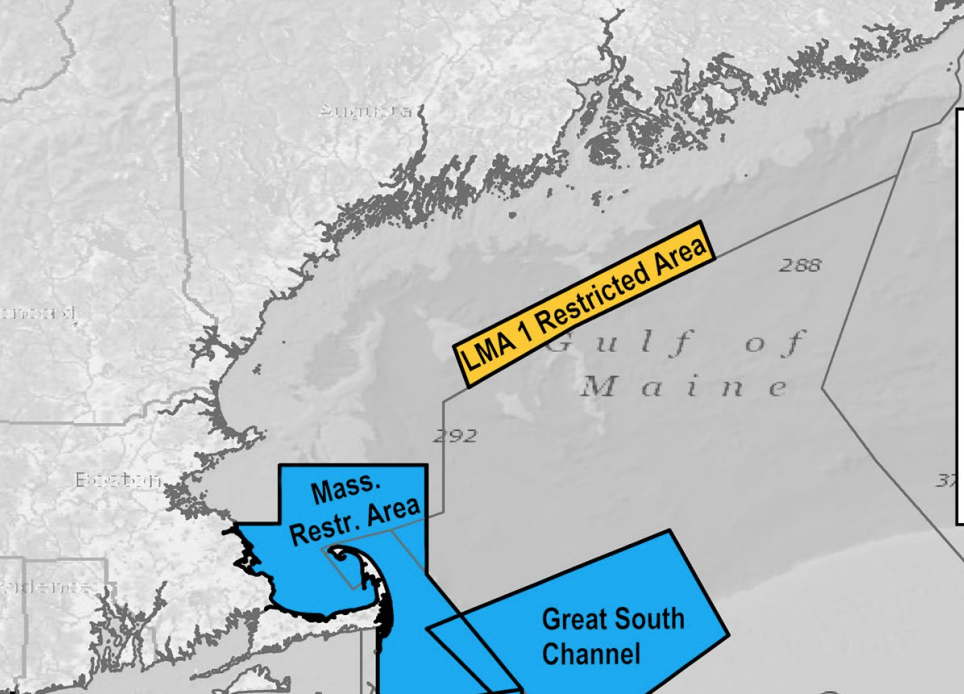 A federal appeals court reinstated NMFS’ seasonal closure of a 967-square mile rectangle in the Gulf of Maine to lobster gear, ruling a lower court went too far in delaying the agency’s rule to protect endangered right whales from entanglements.

But on Nov. 16 a panel of U.S. First Circuit appeals judges in Boston issued a stay of the lower court injunction, allowing the closure to take effect while lawyers for NMFS continue their appeal of Walker’s decision.

Late Wednesday morning NMFS emailed an advisory to fishermen that gear must be removed again:

"Lobster and Jonah crab trap/pot fishermen fishing in the LMA 1 Restricted Area must remove all trap/pot gear from this area, and may not reset trawls being actively fished, or set new trawls in this area as of today. The area will remain closed through January 31, 2022.

Ban on lobster fishing to save whales is back, court rules  Boston Herald

Fishermen must remove all trap/pot gear from Gulf of Maine restricted area, per NOAA  PenBayPilot.com

"Given the capacity of offshore fishing vessels to remove and relocate trawls as well as potential weather and safety concerns, we anticipate it could take up to two weeks for all lobster and Jonah crab trap/pot gear to be removed from the LMA 1 Restricted Area."

In the new decision, Circuit Judge William J. Kayatta Jr. wrote “ the lower court misapprehended the record and over-stepped its role in rejecting the judgements of the agency that Congress has charged with protecting marine mammals.

“And, while there are serious stakes on both sides, Congress has placed its thumb on the scales for whales.”

In his decision Walker questioned NMFS reliance on a “decision support tool,” mathematical modeling to outline the LMA 1 closure area.

If NMFS’ modeling was the only evidence available to support the new whale preservation efforts it could be justified, the judge wrote.

“But that is not the case – the agency does have the ability to generate evidence more reliable than abstract mathematical models to prove or disprove right whale occurrence rates in the Gulf of Maine in the winter season, most notably in the form of passive acoustic recorders that have this year been placed along the Maine coast and could have been placed earlier during the multi-year review process that resulted in the Final Rule,” Walker wrote.

But the appeals court, recounting the imperatives put upon NMFS by the Endangered Species Act and Marine Mammal Protection Act, said federal courts have a limited role in second-guessing the agency’s decisions.

“With Congress having thus mandated action to protect the right whale from commercial fishing, and with plaintiffs (lobstermen) point to no procedural failure by the agency in deciding what action to take, the district court had only a narrow role to play,” Circuit Judge Kayatta wrote. “A court can set aside an otherwise proper agency action if it is arbitrary and capricious or if it is not based on substantial evidence.”

With less than 360 right whales estimated to survive in the North Atlantic population, losing even one whale a year to entanglement will drive the species closer to extinction, the appeals judges noted.

In their 26-page opinion the judges found NMFS acted reasonably in estimating the potential danger of whale entanglements in LMA 1, and cited evidence that autonomous research gliders with acoustic sensors had detected right whales in the region during 2018 and 2019.

“None of this is to discount entirely the district court’s correct observation that the modeling employed by the agency, in several important instances, relied on estimates of uncertain events (such as entanglement risks in given areas), rather than hard, verifiable numbers,” the appeals court said. “We see no scientific basis, though, for categorically rejecting an agency’s use of well-considered estimates.”