Mid-Atlantic
This sturgeon was caught in Maryland’s Nanticoke River in 2006, near the river's confluence with Marshyhope Creek. Dave Harp 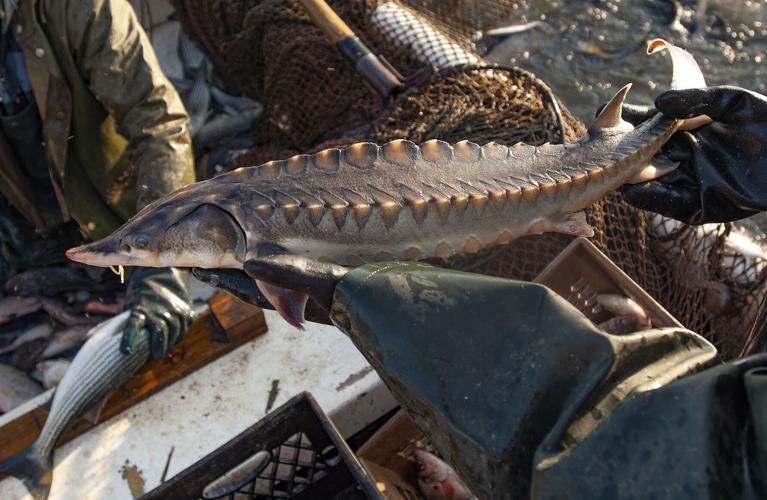 If you’re trying to catch a living dinosaur, you’d better use a big net.In this case, that would be a net long enough to stretch nearly the entire 400-foot width of Marshyhope Creek. Even then, you’re likely to come up empty.

“There aren’t many up here,” said Matt Baldwin, a fisheries biologist with the Maryland Department of Natural Resources. He and his small team of researchers on a late-September morning had just finished unfurling four nets across the creek at intervals several hundred yards apart. “So, it’s exciting when we catch one.”

For several years, Baldwin and other scientists operated largely in obscurity, their tedium broken only by the occasional appearance of an Atlantic sturgeon in their nets. Then came a Norwegian company’s proposal in 2020 to build a $300 million indoor salmon farm that would discharge millions of gallons of wastewater into the Marshyhope.

Suddenly, those scientists found themselves at the center of an increasingly pitched battle over the future of the waterway on Maryland’s Eastern Shore. Some chose to wade in.

They warned state regulators and officials in the town of Federalsburg that the fish factory could wipe out the small population of sturgeon in the Marshyhope. And if those fish were lost, so too would be the state’s only suspected breeding population of the ancient — and federally endangered — fish species.

Concerned neighbors and environmentalists took up the message themselves. Then, it found its way into an Oct. 14 press release from AquaCon, the plant’s would-be developer: “Public comments … drew attention to Atlantic sturgeons’ use of Marshyhope Creek, which warrants further consideration and evaluation.”

In the same announcement, AquaCon said it was pulling its request for a state discharge permit, effectively shelving the massive project until further notice.

It remains unclear if the company will resurrect its Federalsburg plans or pour its energy instead into one or two separate locations it has been pursuing elsewhere on the Shore, both outside the Marshyhope’s drainage area.

AquaCon’s proposal may have been destined for the wrong place at the wrong time. If it had materialized a decade or so earlier, the project almost certainly would have faced fewer obstacles.

But once a strange-looking fish leapt into a fisherman’s boat, everything changed.

Atlantic sturgeon co-existed with dinosaurs and still bear a passing resemblance. Instead of scales, their backs are covered in bony plates called scutes. They are the largest fish native to the Chesapeake Bay, growing to as long as a Volkswagen Beetle (about 14 feet) and weighing nearly as much as a horse (about 800 pounds).

The bony fish species once abounded in the Bay, numbering in the hundreds of thousands. But its population plummeted from overfishing, loss of habitat and worsening water quality, experts say. By the late 1990s, researchers began publishing scientific epitaphs of the Chesapeake population, declaring it to be “functionally extirpated.”

One of those researchers was Dave Secor. “Clearly, I was wrong about that,” said Secor, a longtime scientist with the University of Maryland Center for Environmental Science. “Thankfully.”