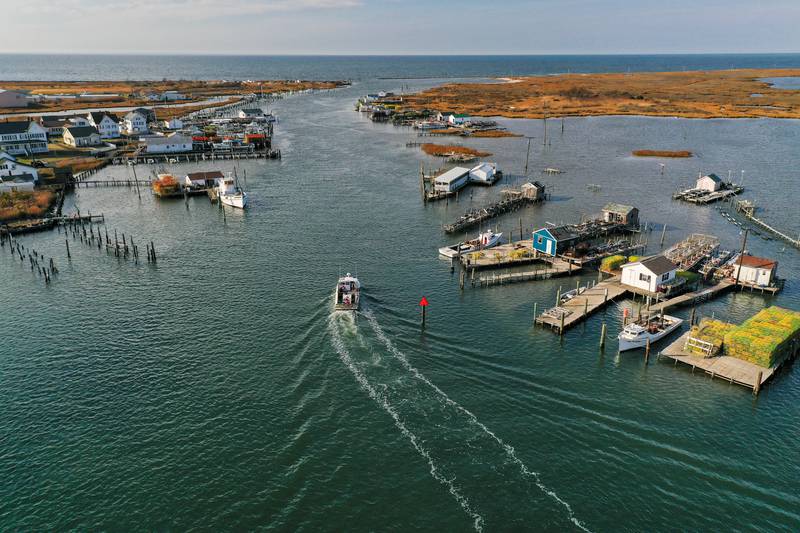 TANGIER ISLAND — Tangier Island in the Chesapeake Bay has long been engaged with a battle against erosion and rising water. Has its salvation been skulking just offshore this whole time?

Two potential projects would deploy oysters, one of the cornerstones of the island’s seafood-based economy, as protection against land-devouring waves and storm surge. Both are in the early stages of development.

The efforts would construct oyster reefs close enough to the shoreline for the structures to be above the water’s surface during low tides and at least partially during most high tides. The result would be a kind of living wall that could deflect wave energy.

Tangier Island, Virginia’s only inhabited island not connected to the mainland by a bridge, has drawn media attention from around the world as an early battleground in the fight against sea level rise. One scientific forecast suggeststhat the island’s 400 residents will be forced to leave in about 30 years as the remaining dry land converts to saltmarsh.

Self-reliance may be at the core of Tangier’s culture, but for years, its leaders have been clamoring for outside help to extend the life of their shrinking island.

Norwood Evans, a Tangier Town Council member, said the community can’t afford to wait much longer. “I’d like to see stuff move along,” he said.

He recalled watching helplessly recently as waves pummeled the shoreline, breaking off chunks “like flipping open a soda tab.” Evans said he believes that the two oyster restoration projects would go a long way toward sheltering the island from further losses.

Oysters already lurk in the surrounding waters, of course, but are nowhere near their historic densities, and their reefs no longer reach heights that break the water surface. The new efforts seek to change that.

The first project is an effort to shore up two vulnerable stretches of Tangier coastline. Both were identified by the council as top priorities for protection.

They lay along a low, marshy shard of land separated from the main island by a narrow boat channel. The “Uppards,” as it is known, was home to a settlement whose residents departed by the 1930s because of its isolation and increasing inundation.