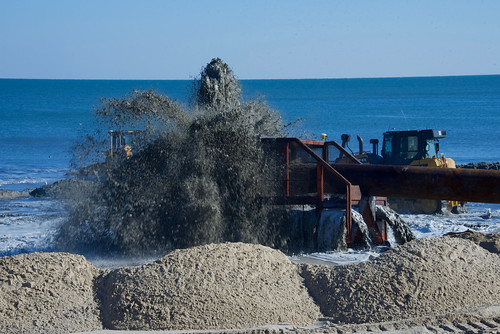 The Bureau of Ocean Energy Management (BOEM), the U.S. Army Corps of Engineers Baltimore District (Corps) and the Maryland Department of Natural Resources have entered into an agreement allowing the Corps to use sand from the Outer Continental Shelf for scheduled beach nourishment as part of its Atlantic Coast of Maryland Shoreline Protection Project.

The agreement gives the state, working in partnership with the Corps, access to 1.3 million cubic yards of sand for the nourishment of 8.3 miles of beach including 7 miles of sand dunes in Ocean City, Maryland. The beach is a significant economic driver for Ocean City, which boasts more than 8 million visitors annually.

“We are proud to partner with the Army Corps and the state of Maryland to support the nourishment of the beaches of Ocean City to improve their ability to withstand severe storms,” said BOEM Director Amanda Lefton. “This project demonstrates the value of state and federal partnerships to utilize Outer Continental Shelf resources to help reduce risk to communities from climate change by improving the resiliency of the coast.”

Ocean City’s beaches have been replenished five times since 1998, each time using sand resources from state waters. This project requires sand from federal waters. The Corps estimates that since the project began, it has prevented more than $927 million in storm damage.

“This agreement is a fantastic example of interagency coordination between the Bureau of Ocean Energy Management, the Maryland Department of Natural Resources and the Corps of Engineers,” said Justin Callahan, chief of the Civil Project Management Branch, Corps, Baltimore District. “Beach renourishment is a key component in reducing the risk of coastal storm damage for the Town of Ocean City, and we have worked very closely with our partners to ensure that sand from the Outer Continental Shelf used for this renourishment will be removed in a manner that has the least impact on the environment.”

“The Atlantic Coast of Maryland Shoreline Protection Project is an excellent example of resource coordination,” said Maryland Department of Natural Resources Secretary Jeannie Haddaway-Riccio. “It allows us to protect habitat for key species while also supporting outdoor recreation on Ocean City’s beaches, which is a significant economic driver. Working with our federal and local partners, we are able to accomplish these important goals as effectively and efficiently as possible.”

Sand for this project will come from Weaver Shoal located more than 3 miles offshore of Ocean City. Through BOEM-funded cooperative agreements over a number of years, the state has evaluated OCS sand resources for coastal resilience and restoration planning. The Maryland Geological Survey in the Department of Natural Resources evaluated and consolidated decades worth of offshore data to identify sand resources as well as benthic habitat. These data were crucial in the selection and design of the Weaver Shoal Borrow Area.