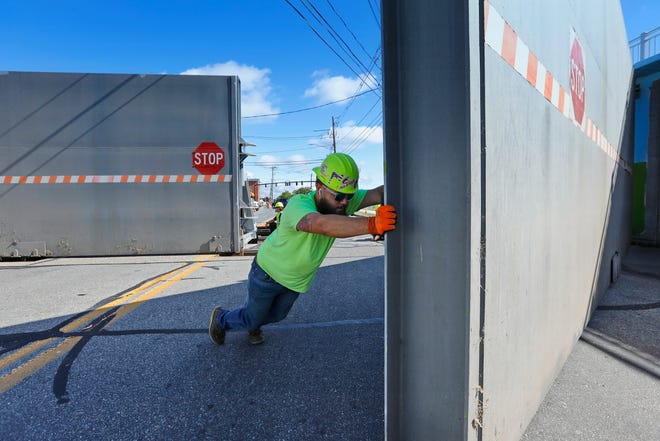 MA - 'Waiting for the ultimate test': What to know about the New Bedford Hurricane Barrier

The project protects about 1,400 acres in New Bedford, Fairhaven and Acushnet from tidal flooding associated with hurricanes and coastal storms. This area is thickly settled with industrial and commercial properties, particularly along the waterfront and the shores of the Acushnet River.

It took four years of construction involving almost one million man-hours of work fashioning 900,000 or so tons of granite into the approximately 18,000-foot-long insurance policy against tidal flooding associated with hurricanes and coastal storms.

Now in its 56th hurricane season, the barrier is in fine fettle, having undergone routine inspections and maintenance repairs earlier this year.

The United States Army Corps of Engineers is required to conduct a "dewatering" of the barrier every eight to 10 years. That allows the Corps to thoroughly inspect the areas behind the sector gates that are normally hidden below the water level, as well as complete a variety of maintenance repairs, according to a press release.

In this latest checkup, the USACE also replaced wheels along the sector gates and painted barrier structures to prevent corrosion.

The New Bedford Dept. of Public Infrastructure has also performed its annual maintenance chores. DPI Commissioner Jamie Ponte said the barrier is split up into three segments, New Bedford's segment, the Army Corps' segment, and Fairhaven's, with each responsible for its portion's maintenance.

"We maintain and exercise the street gates. We make sure there's no encroachments or growths along the hurricane barrier itself. There are some salt water intakes that run under the barrier. We have to inspect them for their integrity. And then we maintain the pumping station that's built into the barrier," he said.

He added that DPI also educates and trains staff in gate and pumping station operation. "We try to keep a lot of the same staff involved but we do mix in folks considerably to make sure enough people know operations in case of an emergency if somebody's out of town."

Ponte said, "As of right now, everything is in good condition. The Army Corps is pleased with New Bedford's efforts. We're in good standing."

The history of the hurricane barrier

The Standard-Times heralded the barrier's grand opening in a May 1966 article: "It cost $1,000 a foot, is long enough to span the 3.5 mile width of New Bedford, is as high (and wider) than The Great Wall of China, and has enough steel in it to build a Navy destroyer. Its two huge steel navigational-sector gates weigh 400 tons apiece — each 35 tons heavier than the biggest locomotive ever built — and each as tall as a six-story house."