Northeast
The Trustees of Reservations continue to receive pushback on their draft management beach plan for Norton Point and Chappy beaches. — Courtesy Trustees 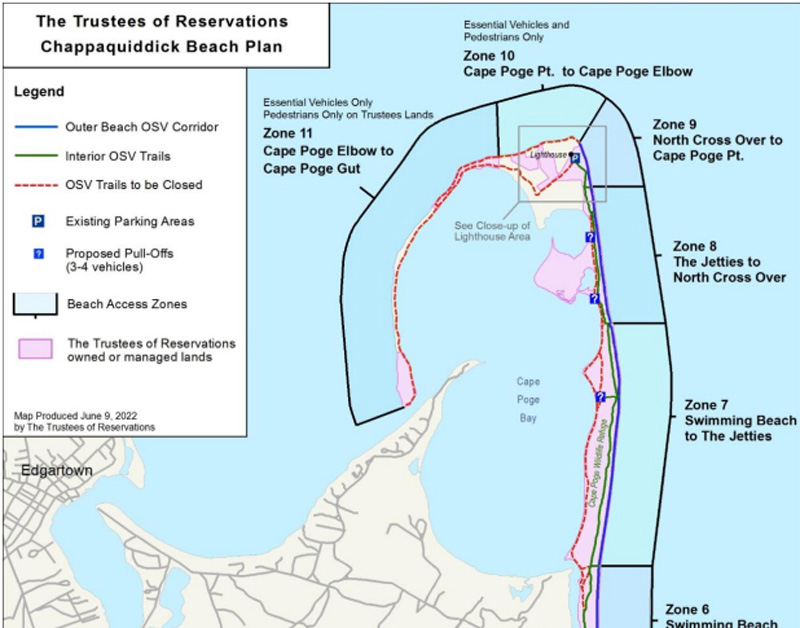 After heavy criticism, The Trustees of Reservations announced Thursday afternoon it was withdrawing a draft beach management plan that placed significant restrictions on over sand vehicles (OSV) and dogs.

The announcement was made through a press release and comes after the Edgartown conservation commission rebuked the plan. The release itself, in its entirety, quotes Trustees president and CEO John Judge:

“Earlier this summer, we released the draft of our updated Beach Management Plan to the public and our partners at the local, county, and state level, and then provided the community with the opportunity to review it, evaluate it, and weigh in with their ideas, and work together with us towards a final plan. Some members of the community have expressed that they would like to have even more voice and input into our planning process. With that in mind, effective immediately, we are rescinding our draft beach management plan and expanding our process to allow for more discussion on these complex issues through local collaboration. The two in-person community meetings and the virtual meetings planned for August will be rescheduled for a date to be determined this fall at which point the revised plan with added community input will be reviewed. The Trustees will be reaching out to stakeholder groups in the coming weeks to better understand areas of greatest concern and develop potential solutions around issues such as bayside Over Sand Vehicle (OSV) access and the dog policy. By pausing to have these conversations we are optimistic that we can come up with a collaborative plan that best balances recreation and resiliency. For more than 60 years The Trustees has been a successful steward of land on Martha’s Vineyard. We remain committed to protecting these dynamic and unique habitats, and the wildlife that calls them home, while also honoring the community’s deep love for the beaches. Our current beach management practices must be changed to reflect the ongoing impacts of climate change like sea level rise and erosion. Together we aim to craft a plan that will ensure that these spaces are best equipped to handle these challenges so the beaches can be enjoyed today and by generations to come.”

The decision to withdraw the management plan comes as the draft was receiving significant pushback from various Island entities and residents. On Wednesday, members of the Edgartown conservation commission and the public attending their Wednesday meeting piled on.

The 49-page draft plan, which in-part hones in on stricter enforcement of over sand vehicle (OSV) access on beaches and consists of new dog restrictions, has been met with contention from residents Island-wide and was lambasted by former Trustees Supt. Chris Kennedy.

After being provided with a thorough presentation by Island director of The Trustees of Reservations Darci Schofield, the commission and members of the public voiced their objections to the strict proposal.

“It’s got some nice pictures in it,” commission chair Edward Vincent said of the lengthy plan. “But there’s a lot of stuff in there that needs to be digested, and there’s a lot of things that I think a lot of the public aren’t going to be happy with.” Vincent said limited bay side access, of which “a great number of Edgartonians,” along with other Islanders and vacationers, “take recreational shellfishing permits and go to those exact spots, limits the recreational use of this property, beyond what it should be.”

Vincent read a letter sent to the commission by Edgartown Shellfish Constable Rob Morrison, in regard to bay side OSV access in Katama Bay and Cape Poge. ”Closing the OSV trails at Cape Poge Bay would be a devastating outcome for the 900 plus annual recreational shellfish license holders in Edgartown,” the letter states. “Closing bay side OSV trails would effectively deny access to almost all of the bay scalloping areas or recreational harvest and the majority of the quahog areas in Edgartown.”