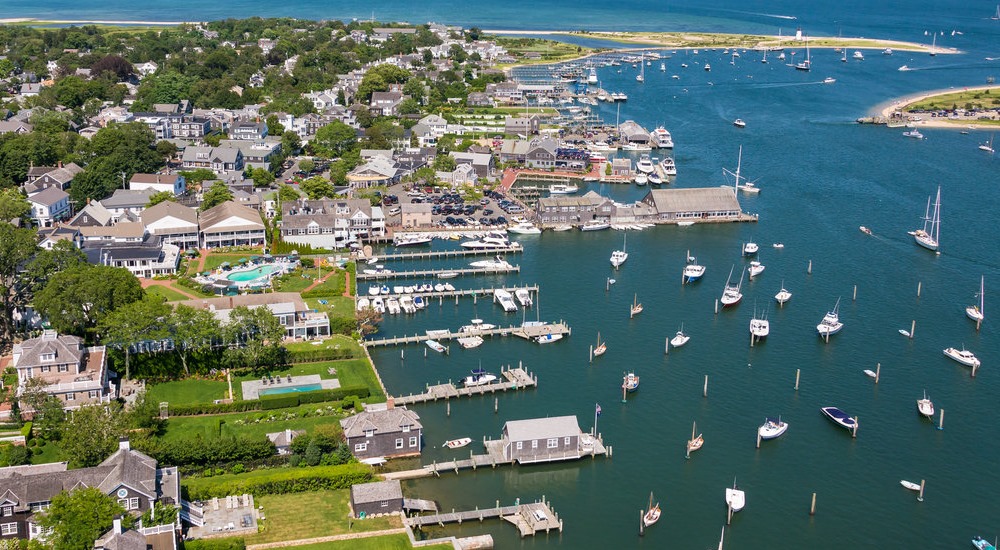 It wasn’t a hurricane or a nor’easter that caused part of a 30-ton seawall on Martha’s Vineyard to collapse in 2008. Instead, it was a minor rain event. On a gloomy day in February, an overcast sky released its showers over the downtown of Oak Bluffs. As the rain continued to fall, it trickled off the pavement and down onto the sandy bluffs.

Before long, the silt beneath the Pay Beach seawall had become saturated. The cement structure trembled against the cascade of rain and sand. In an instant, the wall gave way to the runoff, debris crumbling onto the sloping bluff of Seaview Avenue. Town conservation agent Liz Durkee knew of the concrete’s unstable condition, but had deferred action. She knew that a seawall repair was, at best, a temporary solution to a much more complex issue. As the only barrier protecting a low-lying downtown from storm surges and flooding, the seawall’s collapse was a wake-up call: The climate crisis was here, at the Oak Bluffs shoreline.

For decades, the Vineyard has been the destination for celebrities, Pulitzer prizewinners, and presidents. Seclusive seaside manors tucked away down winding dirt roads have become the preferred hideaways for the rich and famous. Oak Bluffs, formerly known as Cottage City, is one of six towns on Martha’s Vineyard. While one of the smallest towns, its wealth of town beaches and cultural heritage makes Oak Bluffs one of the most populated, diverse towns on the Island.

In the coming decades, climate symptoms experienced by the Island’s population will only get worse. Summer crowds can swell up to 115,000, while the year-round population hovers around 17,000. Despite attempts by conservation commissions to armor the coast, it is inevitable that the 125-mile shoreline will continue to recede. Major coastal roadways, including Lagoon Pond Road and Beach Road, have already experienced a significant increase in flooding over the past couple of years. In the event of a Category 4 hurricane, all access roads to the Island’s only hospital will be underwater. Coastal and estuarine ecosystems will be adversely affected. With shrinking shorelines, endangered species like piping plovers, who prefer to nest on the high shore, close to the dunes, will face displacement. Costly resources will continue to be expended to protect the Island’s iconic lighthouses, many of which date to the 19th century. The nation’s oldest carousel, the Flying Horses, sits only 135 feet away from the encroaching Nantucket Sound.

The Wampanoag Tribe of Gay Head (Aquinnah), pioneers of the whaling and fishing industry, have nearly 500 acres of ancestral lands at stake. On Cranberry Day, seaside cranberry bogs are harvested in keeping with Wampanoag tradition. However, if warming temperatures and invasive species don’t ruin the bogs, sea level rise will. The threatened cranberry bogs remind us that our ecosystems will be facing symptoms far more complex than just rising sea levels. All of these changes would signal huge losses for the people who have such a deep affinity for the land. Whether they know it or not, celebrities, vacationers, and the fiercely loyal local residents are relying on conservationists like Durkee to preserve their beloved Island.