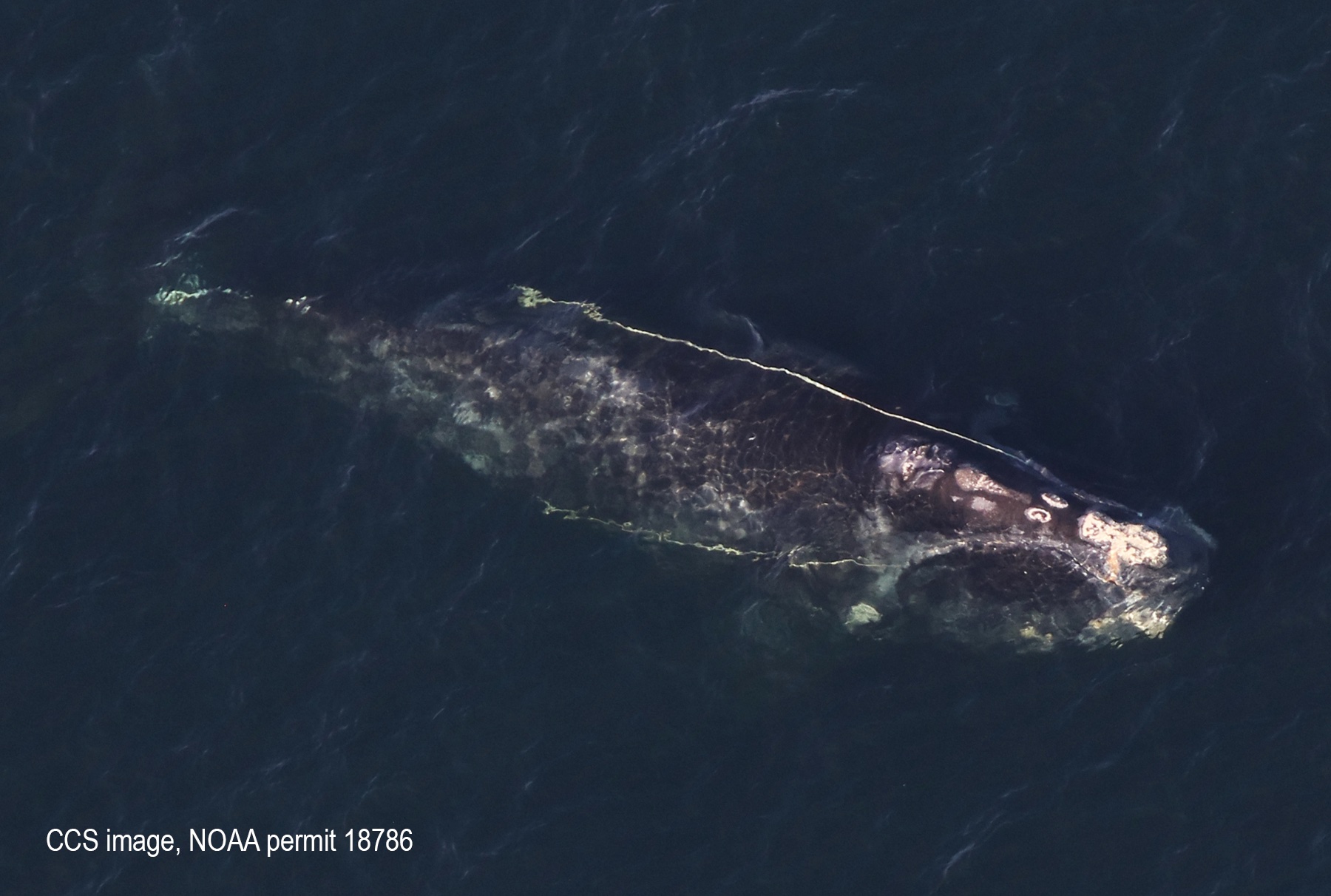 Snow Cone, the resilient North Atlantic right whale who gave birth in December while entangled in rope, has made it safely to Cape Cod with her calf.

She and her new offspring were spotted on Saturday and Sunday on the Atlantic Ocean side of the Outer Cape by aerial observers from the Center for Coastal Studies, based in Provincetown, MA.

Snow Cone is a survivor.  The 17‐year‐old whale lost her first calf in 2020 after it was struck by a ship. In 2021, she came through a life‐threatening entanglement, made the 1,300‐mile migration south to right whale calving grounds off Georgia, and gave birth in December. Then, this spring she travelled north with her calf – all while continuing to carry a length of rope embedded in her jaw.

In March of 2021, The Center’s Marine Animal Entanglement Response (MAER) team removed 300 hundred feet of the rope wrapped around Snow Cone when she was seen off Plymouth, MA. before the whale disappeared with line still attached. In May of that year, the Campobello Whale Rescue Team was able to remove more when she was spotted off the coast of New Brunswick, Canada. Unfortunately, neither of the two disentanglement operations removed all of the rope.

Scientists have been concerned that Snow Cone’s continued entanglement could endanger her life, since wounds caused by the rope can become infected and result in sepsis. This past December, when she was first seen with her newborn near Cumberland Island, GA., disentanglement responders assessed the situation and determined that trying to remove or shorten the rope would be too dangerous with Snow Cone’s calf staying close to her.

Since then, the pair successfully navigated the more than a thousand‐mile journey north to Cape Cod, appearing to avoid the two biggest threats to the survival of these critically endangered whales ‐ being struck by a ship or becoming further entangled.

Center for Coastal Studies researchers noted the first right whale in Cape Cod Bay in late December and by this week field teams have seen approximately 221 right whales in or near Cape Cod Bay on their annual migration north, including some of the 15 new mothers who arrived with calves. But until Saturday there had been no sign of Snow Cone and they were getting concerned.

“We were about 20 – 30 minutes into our flight, travelling on the outside of the Cape, and Brigid (McKenna) was on the right side of the plane when she noticed the rope and we realized it was Snow Cone,” said Ryan Schosberg, one of the two CCS aerial observers in the airplane on Saturday.

“She didn’t look awful, but she is noticeably skinnier. She hadn’t been sighted since being in the southeast about nine weeks ago and we were wondering if she’d come to Cape Cod Bay or if she would pass us by or if we wouldn’t see her again, so it’s a relief that she’s still alive and that her calf looks good,” Schosberg said.

CCS aerial observers found Snow Cone in virtually the same place on Sunday and will continue to monitor her and her calf.

With a population believed to be around 336 animals, North Atlantic right whales are one of the most endangered animals on the planet. The whales are protected by federal and state laws and the Center for Coastal Studies has worked for over 45 years to understand right whale behavior and habitat, as well as to protect them from the serious, sometimes mortal, injuries that result from becoming entangled in rope. The Center’s entanglement response team assists marine animals all year round who are found wrapped in rope and other gear, often far from shore. The team is specially trained and given permits to do the potentially dangerous work by the National Oceanographic and Atmospheric Administration (NOAA), the federal agency charged with protecting North Atlantic Right Whales.