Mid-Atlantic
The red buildings on this map are slated for demolition at the former North Truro Air Force Base. (Map courtesy Cape Cod National Seashore) 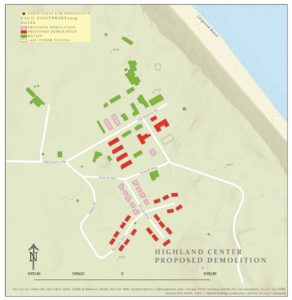 Houses that might have been restored became the Park’s albatross

TRURO — About half of the abandoned buildings at the former North Truro Air Force Base will be razed by 2024 thanks to an $8-million grant to demolish derelict structures in the Cape Cod National Seashore.

Seashore officials applied for the funds through the Great American Outdoors Act. They secured $8.338 million to tear down 44 buildings in the Park’s 46,000 acres, said Linzy French, public information officer for the Seashore.

Twenty-five of the buildings are at the former base, now called the Highland Center, a military outpost from 1950 until 1985 that, at its peak, housed some 500 employees and their families. The last 15 asbestos-laden houses in the ghost neighborhood will be destroyed along with 10 other larger structures. The hazardous building materials will be removed, French said. The work is scheduled to be done in 2023 and 2024.

The grant funds come without any restrictions on future use of the land under the soon-to-be razed properties, French said. That is hopeful news because local organizations have slowly been creating partnerships with the Seashore to use the 110-acre Highland Center.

Payomet Performing Arts Center already produces performances in a circus tent on the property. And Brian Carlstrom, the current Seashore superintendent, told the Cape Cod Times in 2018 that “the Seashore is interested in looking into public, private partnership possibilities for the Highlands Center area that could include seasonal housing.”

The Seashore owns 300 buildings, French said. That includes more than 100 houses that were acquired in the 1970s from people who built on park land after Congress created a building deadline in 1959 that preceded the establishment of the National Seashore on Aug. 7, 1961.

Homeowners in that situation were given life tenancy or 25-year lease agreements, most of which expired in the 1990s. Some were extended, while four homes with architectural and historic significance have been saved and restored by the Cape Cod Modern House Trust, a nonprofit that entered into a 20-year renewable lease agreement with the Seashore.

Some of the buildings in the Park became staff housing. Six are rented out seasonally as vacation properties by the federal government, French said. And many others are rotting away.

“We acquired these homes and, at some point, maybe there was a plan to maintain them,” French told the Independent.