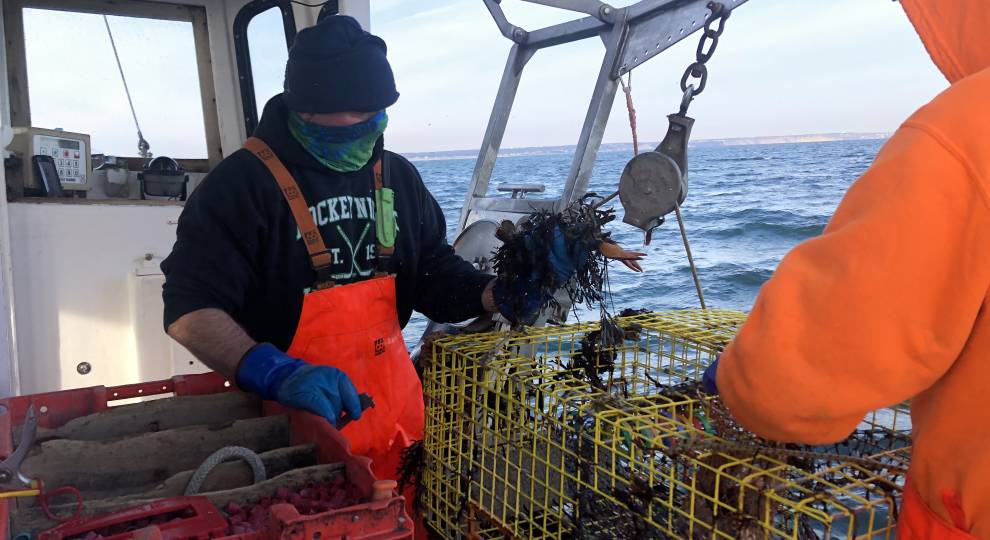 The lobster industry could be getting a new sound.

On a cold January morning, a lobster trap sitting on a table at a manufacturing facility in Wareham is rhythmically beeping. Two final beeps have a special meaning.

With this technology, lobstermen can send the acoustic signal from a phone app to a trap on the ocean floor. The signal triggers an airbag, with a line attached, to launch up to the surface, allowing the traps to be hauled in. These “ropeless” systems do away with the high number of vertical lines that run from buoys on the surface down to traps on the ocean floor.

Looking at this table, Morris sees the future of the fishery – and many conservationists share that hope. Ropeless fishing eliminates vertical lines in the water column that are blamed for around half of all reported North Atlantic right whale deaths.

But experts say the transition to ropeless is moving too slowly. By the time working gear can get into the boats of thousands of lobstermen across New England, it may be too late to save critically endangered right whales.

It’s being held up by technical, regulatory, and financial factors.

“If you talk to fishermen about ropeless fishing, one of the first questions out of their mouth is, ‘What is this going to cost?,’” said Mark Baumgartner, a marine ecologist at the Woods Hole Oceanographic Institution, and vice chair of the Ropeless Consortium. “To me, it's a 100 percent legitimate question. If this gear is going to be prohibitively expensive to them, adopting ropeless is essentially closing the fishery.”

Current EdgeTech systems could cost anywhere from $7,500 for one line of traps to $70,000 for a boat’s total gear conversion, according to Morris. Economies of scale are expected bring that down, but even so, it’s out of reach for nearly all fishermen.