Northeast
Researcher Ellie Rothermel configures an acoustic receiver off coast of Ocean City, Maryland, to monitor to the movement of Atlantic sturgeon and striped bass off the Delmarva coastline. University of Maryland Center for Environmental Science/Mike O’Brien 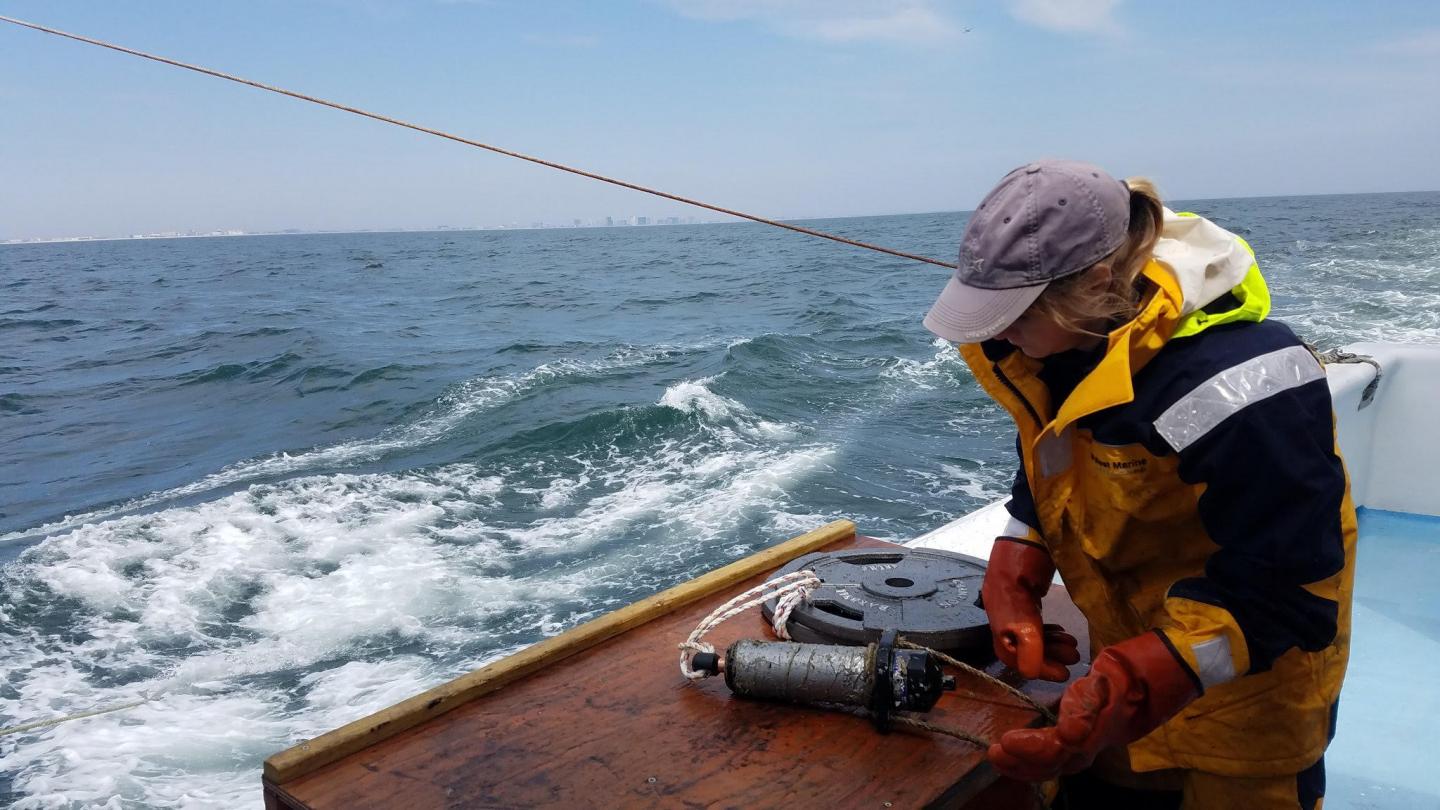 SOLOMONS, MD – For the endangered Atlantic sturgeon and the commercially and recreationally important striped bass, the Delaware-Maryland-Virginia coastal shelf serves as an important spring and fall “flyway.” Typically thought of as an established aerial route used by migratory birds to travel between feeding and breeding grounds, a recent study by scientists at the University of Maryland Center for Environmental Science applies the term to fish species of concern.

Authors suggest that the development of wind farms on the Delmarva coastal shelf, 17-26 miles from Ocean City’s shoreline, may alter the migratory behavior of these fish as new wind turbines in this otherwise featureless region could create habitat around which fish linger.

Studies within the Maryland Wind Energy Area–the coastal shelf waters leased by the Bureau of Ocean Energy Management for offshore wind farms–prior to construction activities reveal that Atlantic sturgeon and striped bass are frequent visitors. Seasonal trends lead scientists to believe that the wind energy area lies within an important migration corridor for both species. Atlantic sturgeon were most commonly observed moving through the area during the spring and fall, while striped bass had an increased migratory presence in spring and winter. The Atlantic sturgeons’ “flyway” tended to favor shallower, warmer waters, while striped bass were more likely to be found at great depths and cooler conditions.

Both species spent longer periods of time in the corridor during the autumn and winter. This trend was particularly strong for striped bass, with many individuals prolonging their presence on the outer shelf during winter. However, during the summer, Atlantic sturgeon were rarely detected and striped bass were absent.

The construction of an off-shore wind farm creates loud noises and increased activity that can disrupt typical animal behaviors. The low occurrence of these important fish species during the summer months suggests a potential window for wind turbine construction, when impacts could be minimized.

“Scientists have learned a lot about the Atlantic sturgeon and striped bass’ seasonal patterns of habitat selection within spawning rivers, estuaries, and shelf foraging habitats,” says study author Ellie Rothermel, who recently received her master’s degree from the University of Maryland Center for Environmental Science. “During these times, we know where the fish are likely to be and when to expect them there, but information on the location and timing of key coastal migrations is limited. Coastal waters have been largely inaccessible to scientists. Our study uses acoustic telemetry to understand the critical migratory periods in the lives of these fish species.”

Rothermel compares acoustic telemetry to the E-ZPass system used for vehicles. When a car with E-ZPass is driven over the Bay Bridge, a toll booth collects its identification number, along with the time and date. Just like toll booths and the E-Z Pass system, scientists use acoustic receivers and tags to track where fish go, and when they go there.

After catching and determining the size, weight and sex of a striped bass, scientists surgically implanted an acoustic tag into the fish prior to releasing it. An acoustic tag is a small device, about the size of a thumb, that has a unique ID and makes a “ping” sound every few seconds.

Scientists also deployed 20 acoustic receivers in the Maryland Wind Energy Area. When a tagged fish swims past a receiver, a listening device about the size of a liter soda bottle, the receiver records the “ping” sent out by the tag. Each “ping” transmits its unique ID and the depth at which the fish was swimming to the receiver, which also records the time and date. The array of receivers allows scientists to monitor the movements of tagged fish. During the study, “pings” from 352 individual Atlantic sturgeon and 315 individual striped bass were recorded by receivers.