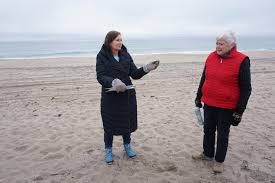 MA - Mapping the shore in Charlestown

An engineering survey is the first step as Charlestown mulls what to do with town-owned beach property. The results could reignite the always fierce debate about the right to public access to the shore vs. the rights of property owners.

In late February, a local engineering company went out to Charlestown Beach Road to take some measurements.

The work was done quickly, ahead of schedule, and left only one visible trace: galvanized steel pipes sticking out of the sand, festooned with orange ribbons. Those pipes mark where, exactly, the town owns property along the beach — more than two acres of sand and grassy dunes. The land is not currently marked as public and, because of that, underused, some local leaders say.

“This is the first step,” Town Councilwoman Deb Carney said on a trip to the beach with a Journal reporter on a mild and overcast day in January, before the work was done. “Find out exactly what we own, then decide what we’re going to do with it.”

Will there be disputes over what to do with it?

The results are now in, and subtle as they were, they could have an effect on the way people use the beach in Charlestown, a microcosm of the debates that are always present on a strip of prime Rhode Island beachfront.

Advocates for more beach access say the results of the surveying provide a way forward for expanding areas of public beach as various forces squeeze access from multiple directions: The short-term disputes from private property owners, the long-term threat of rising sea levels due to climate change.

“I understand people wanting more access to the waterfront,” Mark Stankiewicz, the Charlestown town administrator, said. “There comes responsibilities with that as well. Where are they going to park? Where are they going to go to the bathroom? Who’s going to pick up the trash? Do people expect amenities, just lifeguards and things like that? Of which there will be none, of course. You have the balance between the private property owners and the people who want public access.”