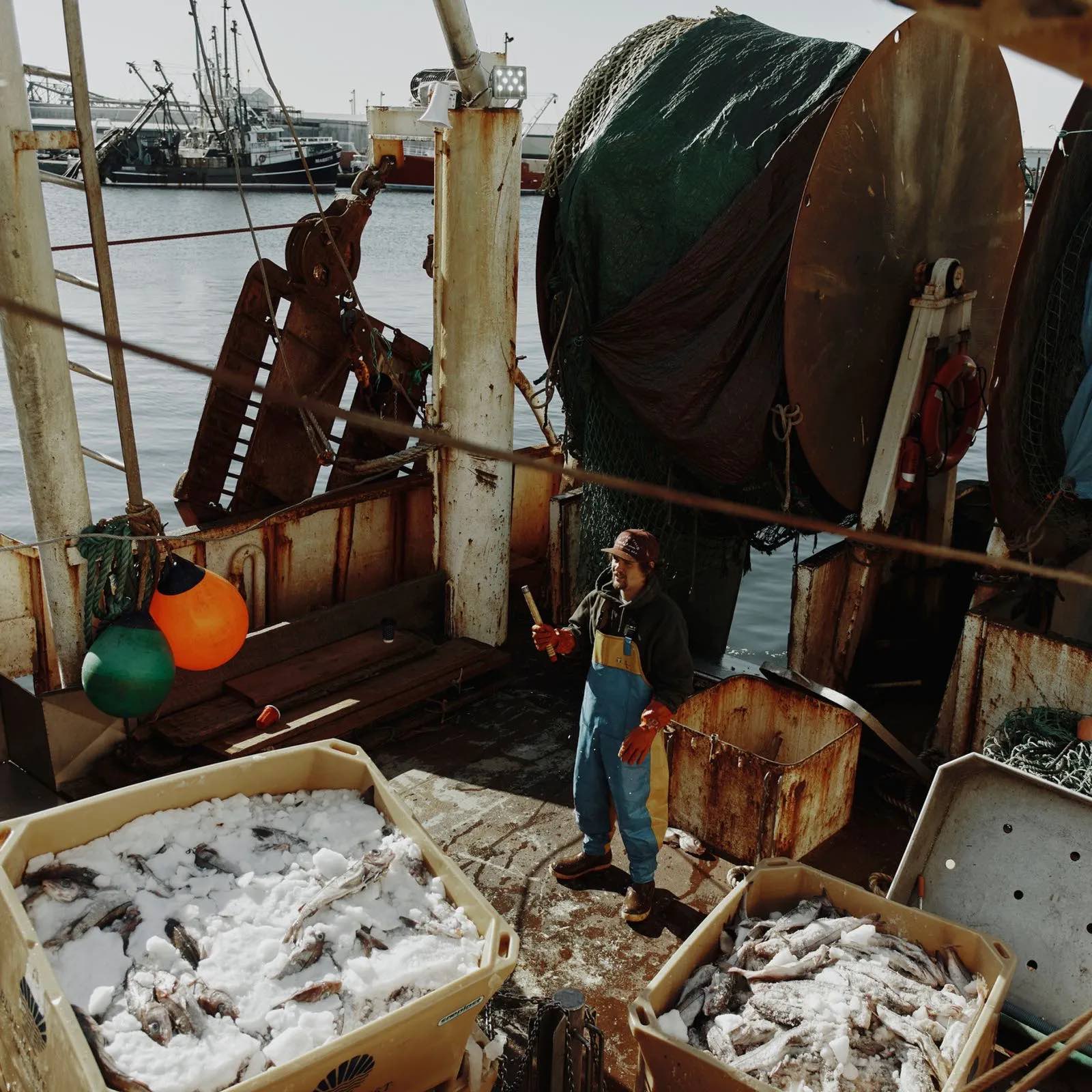 By
Will Sennott | ProPublica via The Connecticut Mirror
Section:
Fisheries
Region:
Northeast

The 85-foot trawler, deep green and speckled with rust, was returning from a grueling fishing trip deep into the Atlantic swells. Leeman and his crew of four had worked 10 consecutive days, 20 hours a day, to haul in more than 50,000 pounds of fish: pollock, haddock and ocean perch, a trio known as groundfish in the industry and as whitefish in the freezer aisle.

As sunrise broke over New Bedford harbor, the fish were offloaded in plastic crates onto the asphalt dock of Blue Harvest Fisheries, one of the largest fishing companies on the East Coast. About 390 million pounds of seafood move each year through New Bedford’s waterfront, the top-earning commercial fishing port in the nation.

Leeman and his crew are barely sharing in the bounty. On deck, Leeman held a one-page “settlement sheet,” the fishing industry’s version of a pay stub. Blue Harvest charges Leeman and his crew for fuel, gear, leasing of fishing rights, and maintenance on the company-owned vessel. Across six trips in the past 14 months, Leeman netted about 14 cents a pound, and the crew, about 7 cents each — a small fraction of the $2.28 per pound that a species like haddock typically fetches at auction.

“It’s a nickel-and-dime game,” said the 40-year-old Leeman, who wore a flannel shirt beneath foul weather gear and a necklace strung with a compass, a cross, and three pieces of jade — one piece for each of his three children. “Tell me how I can catch 50,000 pounds of fish yet I don’t know what my kids are going to have for dinner.”

Leeman’s lament is a familiar one in New Bedford, an industrial city tucked below Cape Cod on the south coast of Massachusetts. In recent years, the port of New Bedford has thrived, generating $11.1 billion in business revenue, jobs, taxes and personal income in 2018, according to one study. But a quiet shift is remaking the city and the industry that sustains it, realizing local fishermen’s deepest fears of losing control over their livelihood.

Blue Harvest and other companies linked to private equity firms and foreign investors have taken over much of New England’s fishing industry. As already harsh working conditions have deteriorated, the new group of owners has depressed income by pushing expenses onto fishermen, an investigation by ProPublica and The New Bedford Light has found. Blue Harvest has also benefited from lax antitrust rules governing how much fish it can catch.

Since it was founded in 2015, Blue Harvest has been acquiring vessels, fishing permits and processing facilities up and down the East Coast. It started with the self-proclaimed goal of “dominance” over the scallop industry. It has expanded into groundfish, tuna and swordfish, as well as becoming a government contractor, winning a $16.6 million contract from the U.S. Department of Agriculture this past February to supply food assistance programs.