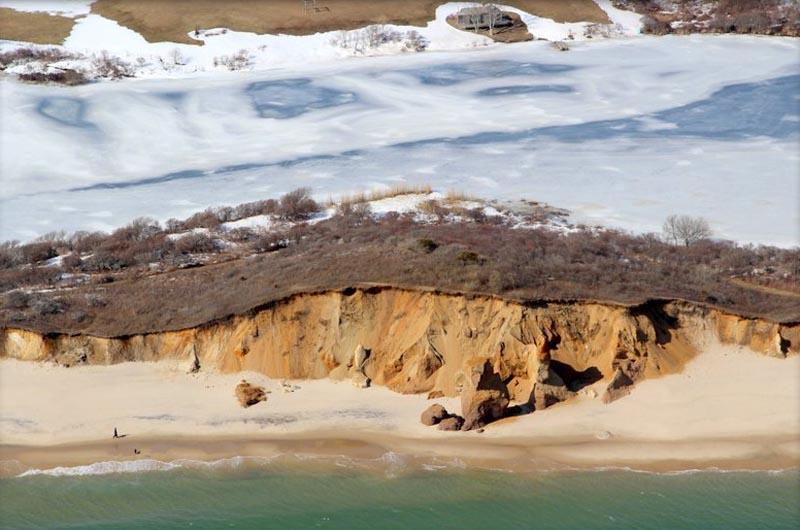 The predawn collapse of the spire at Lucy Vincent Beach last weekend triggered an emotional response. For many it was a moment of reflection, or even catharsis, as the Island trudged through the sixth week of the ongoing pandemic. But despite the magnitude of response, the iconic landmark provided a microscopic glimpse into the vast geological process that once formed the cliffs and is now washing them away.

“In the course of geological change, it’s not even an eye blink,” said Bow Van Riper, Island historian, geologist and research librarian at the Martha’s Vineyard Museum. “Of course it is meaningful in the lives of people who walked on the beach these past decades. But in the grander geological scheme, it is no more significant than sandcastles you makes on the beach that are gone in the next tide.”

The geological process that formed the cliff at Lucy Vincent starts quite literally at the beginning of time on earth. But to shave a few billion years, Mr. Van Riper decided to start the story roughly 21,000 years ago.

Geologists talk about the most recent era in earth’s history as a series of ice ages separated by glacial periods. In the most recent cold period, which reached a climax 21,000 years ago, glaciers had spread from the northern tip of Canada down to Manhattan, extending as far west as where the Vineyard and Nantucket are now.

“We are talking about a sheet of ice roughly a mile thick . . . imagine a bulldozer with a blade a mile high, pushing a gigantic ridge of dirt and rocks and boulders in front of it,” Mr. Van Riper said. “As it moved southward, it exerted an incredible force, capable of moving boulders along the earth like a kid kicking a soccer ball.”