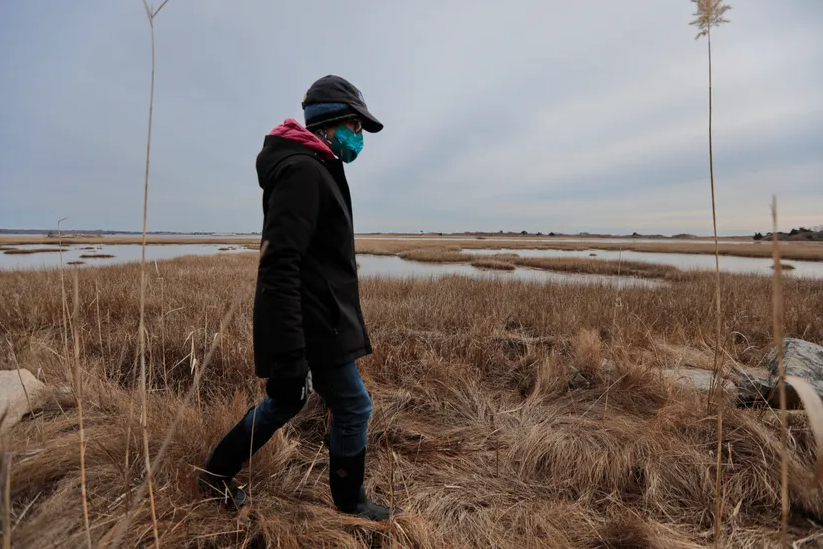 In her tall waterproof boots, she stands atop an old stone wall transecting the marsh's western edge and points to two sizeable pools of water, naturally demarcated by the tan marsh cordgrass.

On the other side of the stone wall — in some parts visually distinct with a lighter, windswept marsh grass — water pools, too. Saltmarsh hay (which likes drier conditions) has slowly migrated upland into the bushy brush to escape the water line creeping up higher and more frequently.

Years ago, cordgrass would have jutted through the pool's water line. But today, some areas are bare: muddy flats at low tide and pools of water at high tide. Perry says with more frequent inundation due to accelerated sea level rise, some cordgrass has died off.

Based on vulnerability assessments, Perry, a climate adaptation ecologist for Mass Audubon, said they expect to lose a "large amount" of the salt marsh habitat in Dartmouth by 2070 without intervention. With intervention, though, they can try to make the over 200-acre coastal grassland more resilient to climate change, which is what Perry and the organization will start work on this year.

In 2020, the U.S. Environmental Protection Agency, in partnership with nonprofit organization Restore America's Estuaries, awarded Mass Audubon $150,000 to mitigate the impacts of climate change at two of its properties — the Allens Pond Wildlife Sanctuary in Dartmouth and the Great Neck Wildlife Sanctuary in Wareham.