Northeast
The erosion-control project at the base of the Sankaty Bluff with coir logs and buried geotubes last January. PHOTO BY NICOLE HARNISHFEGER. 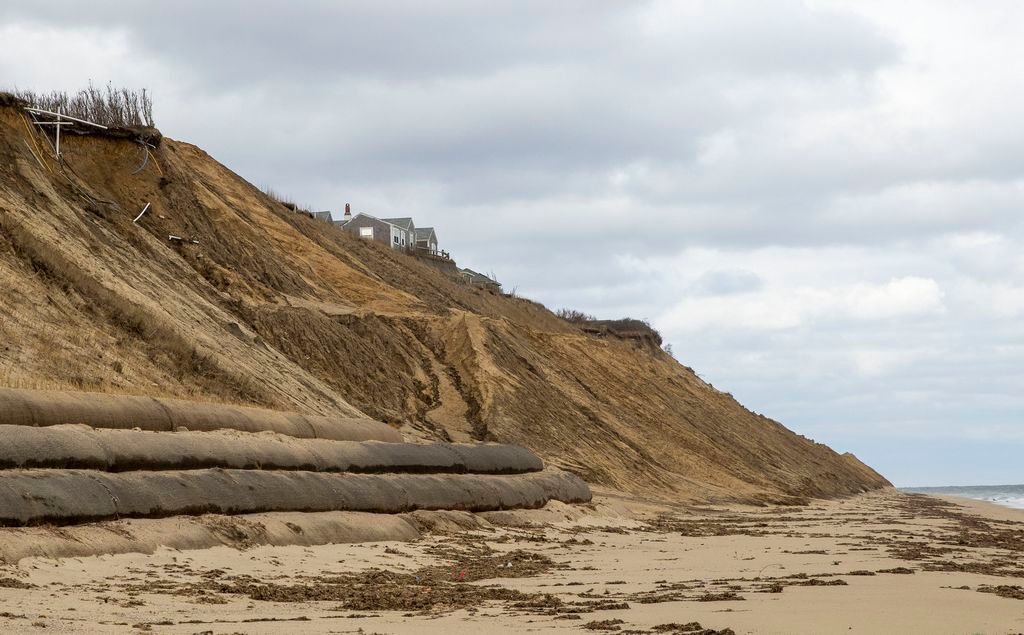 Sconset Beach Preservation Fund: SBPV partnered with the town of Nantucket to implement erosion control efforts in the winter of 2013-2014 and since that has increased the number of geotube layers from 3 to 4 and delivered thousands of dump truck loads of sand to assure that there is no negative impact on surrounding beaches.

(Aug. 31, 2021) The Conservation Commission is preparing to officially order the Sconset Beach Preservation Fund to remove its geotube erosion-control project from the base of the Sankaty Bluff at its meeting Thursday, despite repeated pleas from the Select Board for a joint meeting to reconsider the order. Both sides are expecting the SBPF to appeal the decision.

For the past two months, the Select Board has been asking the ConCom for a revote, and to wait for an ongoing report from the coastal engineering firm Arcadis, which the town commissioned for $157,000 in February to find long-term solutions to fight erosion on the bluff. That report is due later this month.

ConCom members argue the vote they took in June to remove the geotubes is based strictly on their finding that the SBPF was in violation of its permit for failure to pour a specified amount of sand on top of the 950-foot project.

ConCom chair Ashley Erisman said the commission could consider delaying the removal, but as for a re-vote, she said the writing’s on the wall.

For complete coverage of this story, pick up Thursday's Inquirer and Mirror, and check back to www.ack.net Thursday night for coverage of the ConCom meeting.