Northeast
Structures like the African Meeting House meld with Nantucket’s streetscape so tidily that one would hardly know they represent a significant chapter of African American history. 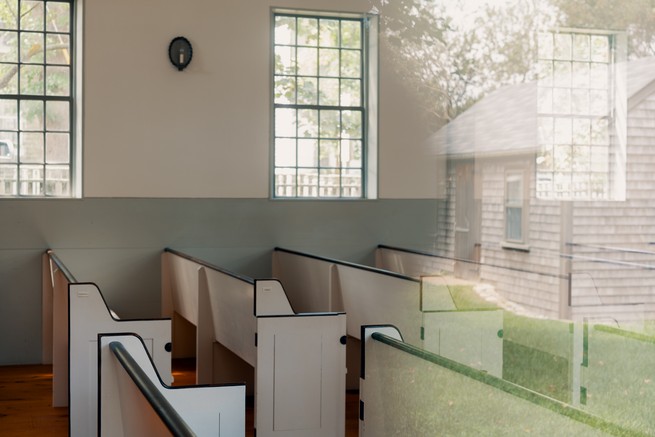 The island was once a place of working-class ingenuity and Black daring.

I caught the fast ferry from Hyannis to Nantucket, 30 miles off the coast of Massachusetts. As the boat plowed the waves, I was taken aback by my first view of the island. I could see it all at once, end to end, 14 miles of isolated terra, dwarfed by the sea and sky. Once we reached the wharf and I joined the carefree crowds of summer tourists, I tried to forget that picture of exposure. But those who live on Nantucket and care about its past and future know that the climate is changing, the sea is rising, and the island has never been more vulnerable.

“We are a pile of sand out here,” Marsha L. Fader, an architect and a preservation specialist, told me. We were standing on a grassy green, shaded by trees in their full June glory, in an area known as Five Corners. Back in the late 1700s and the 1800s, it was part of a neighborhood called New Guinea, a name reflective of its ethnic origins. Two buildings remain from that time: a house built by a Black man, Seneca Boston, who had been enslaved on the island in the mid-1700s, and the African Meeting House, which also served as a church and school. These structures constitute some of the oldest Black landmarks in America.

Florence Higginbotham, a Black cook and domestic worker, purchased the Boston house in 1920, and the Meeting House 13 years later. No one knows for sure why she bought the buildings, but we owe their continued existence to her. After she died, the Meeting House fell into disrepair. In 1986, a headline in Nantucket’s Inquirer and Mirror read: “Historic Black Church on York Street Awaits Restoration–Or Collapse.” A few years later, Higginbotham’s son sold the African Meeting House to the Museum of African American History, headquartered in Boston. But even the museum struggled to pay for the upkeep. In an appeal for support in the ’90s, the major threats to the African Meeting House were identified as “neglect,” “deterioration,” and “insufficient funding.” Some islanders saw the building as an eyesore, asking: “Why don’t you just tear it down?”