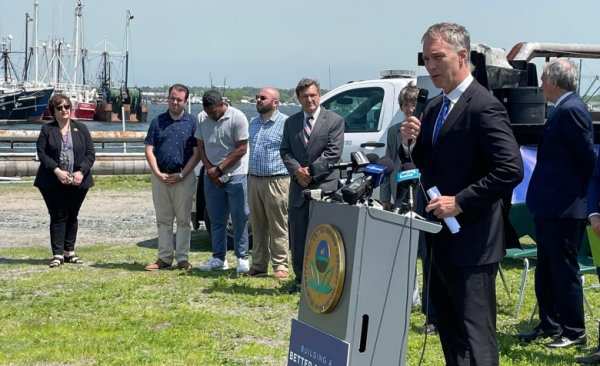 “The U.S. Environmental Protection Agency’s (EPA) Deputy Administrator, Janet McCabe was joined today near the banks of New Bedford Harbor by federal, state and local officials to announce that EPA’s decades-long work to address PCB contamination in New Bedford Harbor sediments is now on track to be completed in about three years thanks to a major commitment from the Biden Administration to allocate $72.7 Million from the Bipartisan Infrastructure Law (BIL).

Also today, EPA and the Commonwealth of Massachusetts announced a settlement with Cornell Dubilier Electronics, Inc., a South Carolina-based capacitator company with a facility in New Bedford, which will provide an additional $3.6 million for the completion of shoreline remediation of the harbor and $400,000 to the Commonwealth toward the costs of operating and maintaining the Superfund remedy.

“I am thrilled to announce that thanks to vital funding from the Bipartisan Infrastructure Law and the steadfast commitment of our enforcement attorneys, state counterparts, and community partners, EPA now has the resources to complete the job of addressing hazardous pollution that has contaminated New Bedford Harbor for decades,” said EPA Deputy Administrator Janet McCabe. “EPA and the Biden-Harris Administration have prioritized protecting public health and addressing environmental impacts in communities who have historically been left out of the conversation and overburdened by dangerous pollution. I am proud of this collaborative effort and the progress that we have made.”

The New Bedford Harbor site is one of thousands of contaminated sites nationally that have been given Superfund status due to the nature and extent of hazardous wastes at the site, and the cost and logistics associated with cleaning them. Superfund sites can include former manufacturing facilities, industrial locations, processing plants, landfills and mining sites. The $72.7 million allocation for the New Bedford Harbor Superfund Site is part of a $1 billion “first wave” of funding from $3.5 billion in the Bipartisan Infrastructure Law to help cleanup polluted Superfund sites in communities across the country.

The historic Bipartisan Infrastructure Law is making a huge difference in EPA’s efforts to protect human health and the environment. Thanks to funding authorized in BIL, over the next five years EPA will be putting $60 billion into improving the health, equity, and resilience of communities in every corner of the country. Areas that BIL will make a dramatic difference include improving drinking water, wastewater, and stormwater infrastructure, removing lead services lines, and protecting communities from emerging contaminants like PFAS. BIL will invest a historic $5.4 billion to clean up legacy pollution at Superfund and brownfields sites, helping to restore the economic vitality of communities. Finally, BIL is helping U.S. communities to make a $5 billion investment in electric and low-emission school buses and healthier air for children.