Northeast
The iconic arm of Cape Cod as we know it has existed for around 6,000 years. Credit: NASA/USGS Landsat Project Science Office 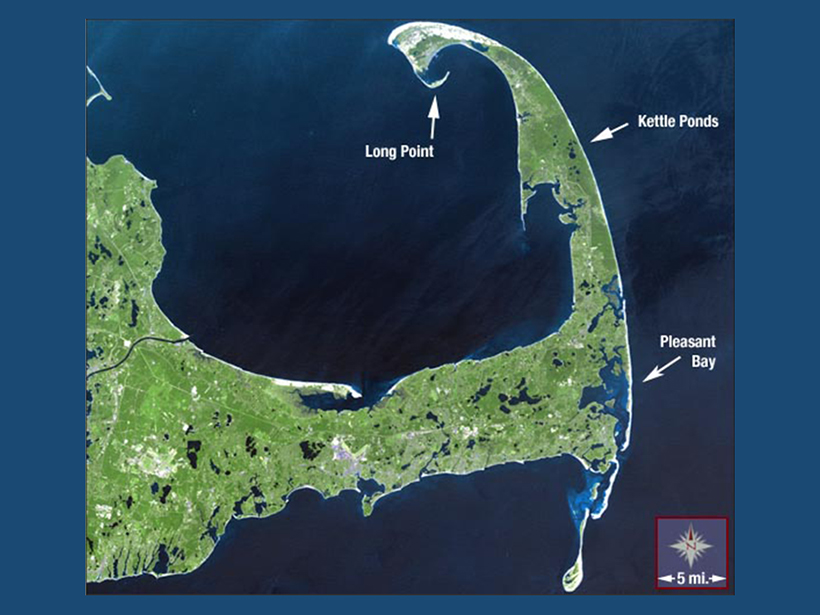 Living in Geologic Time: How long will the cape keep its fist raised against the waves?

Flexing into the Atlantic like a boxer’s raised fist, Cape Cod is one of the most distinctive landforms on Earth. The skinny, crooked peninsula was created by glaciers during the last ice age and sculpted into its present-day form by rising sea levels. In geologic timescales, Cape Cod is just a baby, only a few thousand years old. And with rising seas already lapping at the sandy spit, it’ll be gone in a geologic blink.

The Ghosts of Glaciers Past

Cape Cod, Mass., is famous for being a summer beach paradise but owes its entire existence to ice. During the Wisconsin Glaciation, the final period of the last ice age, the Laurentide Ice Sheet covered all of what is now eastern Canada and New England in ice up to 3 kilometers thick. The southern reaches of this ice sheet extended down the Atlantic coast to an archipelago of glacial landforms collectively called the Outer Lands: Long Island, Staten Island, Cape Cod, Martha’s Vineyard, and Nantucket Island.

“At the peak of the last glacial, where I am sitting was under ice,” said Robert Thieler, director of the U.S. Geological Survey’s Woods Hole Coastal and Marine Science Center in Woods Hole, Mass. As it advanced and retreated along the coast, this mass of ice plowed enormous piles of sediment and glacial fill along its front. “These terminal moraines make up the long east-to-west spine of Cape Cod, as well as the north-to-south oriented moraine that runs under Woods Hole,” Thieler said.

Around 23,000 years ago, the Laurentide Ice Sheet reached its maximum extent and then started retreating, leaving a highly malleable landscape in its wake. Radiocarbon dating indicates that the bulbous landmass that would become Cape Cod was likely ice free by around 18,000 years ago.

The pockmarked scars of this retreat can still be seen on the cape in the form of hundreds of kettle ponds. Kettle ponds form when chunks of ice break off from a retreating glacier and get packed in sediment, which insulates the ice. As the ice slowly melts, it creates a round, water-filled depression. On the cape, kettle ponds often host cranberry bogs, where wild cranberry vines take root in the organic matter that collects in the pot holes. Archaeological evidence indicates that the Wampanoag people harvested wild cranberries from kettle ponds on the cape as far back as 12,000 years ago.