Northeast
Beachgoers line up at Norton Point, one of the busier spots managed by the Trustees of Reservations. Ray Ewing 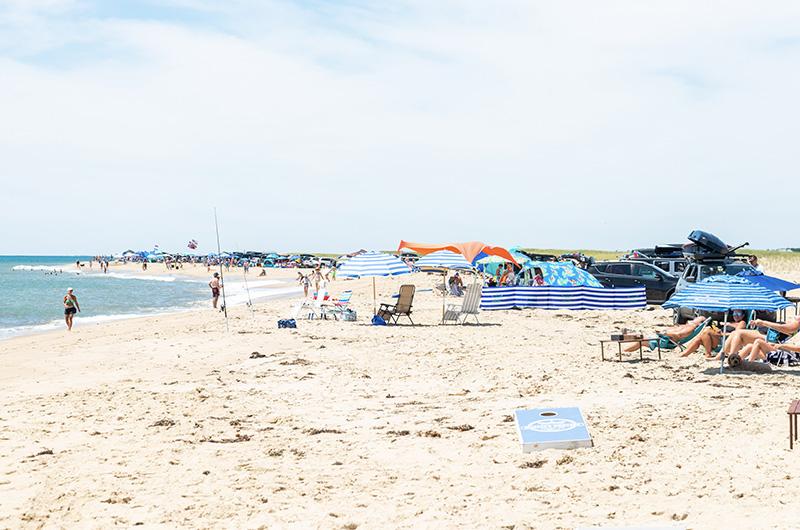 It’s the last Friday in July. At the edge of Katama Bay just west of Wasque Point, a tiny plover chick skitters nimbly across a patch of sand flecked with shells and seaweed. Nearby, a parent bird keeps a watchful eye as the chick forages for food.

This has been a banner summer for shorebirds on Chappy beaches, with piping plovers, least terns and skimmers nesting in record numbers. Still, the newly hatched chicks face long odds for survival, as they are under pressure on all sides: from predators, humans and even the forces of nature that have shaped these dynamic barrier beaches for centuries.

The Trustees of Reservations — the venerable Massachusetts conservancy that owns or manages some 12 miles of diverse public beach from Norton Point to the Cape Pogue elbow — is under pressure on all sides too this summer: from angry landowners, fishermen and others over a new draft management plan that would have brought sweeping changes to these remote outermost beaches used by thousands of Islanders and visitors every year.

The draft plan was abruptly scrapped last week, barely a month after it was released. Acknowledging the public backlash, Trustees president John Judge said his organization would start over this fall, convening local stakeholders and others to draft a new plan.

“We’re going back to the drawing board,” Mr. Judge told the Gazette. “We want to expand the process and tap the collective intelligence of folks . . . including the many people that are passionate about the beach and passionate about the ecological treasure we have there.”

Three years in the making, the plan was grounded in broad scientific study by the Woods Hole Group around the effects of climate change on the beaches and tidelands at Norton Point, Wasque, Leland Beach and Cape Pogue. Leaders at the Trustees, one of the oldest land trusts in the country, described it as an innovative blueprint for the future as they wrestle with the increasingly complicated balancing act of managing privately held conservation lands for public use.

“We’re at the intersection of where recreation meets resiliency . . . they need to be connected with the urgency around stewardship,” Mr. Judge said.

“The issues that are being raised in the beach management plan are issues we have been thinking about for many years,” said Bob Mason, who heads the Chappaquiddick advisory committee for the Trustees, a local group. “Issues around shorebirds, challenges around OSVs [oversand vehicles] . . . and that third leg of complexity around climate change.”