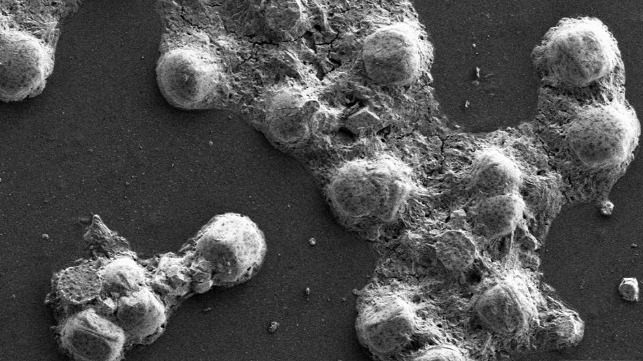 'Lost' ocean nanoplastic might be getting trapped on coasts

As plastic debris weathers in aquatic environments, it can shed tiny nanoplastics. Although scientists have a good understanding of how these particles form, they still don't have a good grasp of where all the fragments end up. Now, researchers reporting in ACS' Environmental Science & Technology have shown experimentally that most nanoplastics in estuarine waters can clump, forming larger clusters that either settle or stick to solid objects, instead of floating on into the ocean.

There is a huge discrepancy between the millions of tons of plastic waste entering rivers and streams and the amount researchers have found in the oceans. As large pieces of plastic break apart into successively smaller fragments on their transit to the sea, some eventually wear down to nano-sized particles. Previous studies have shown that these nanoplastics congregate in well-mixed, stagnant salty water. Yet, these results do not apply when the particles encounter dynamic changes in salt content, such as estuaries, where rivers carrying freshwater meet tidal saltwater. So, Hervé Tabuteau, Julien Gigault and colleagues wanted to perform laboratory experiments with micro-sized chambers mimicking the conditions measured in an estuary to show how nanoplastics interact and aggregate in this type of environment.

To determine how nanoplastics move in estuarine waters, the team developed a lab-on-a-chip device. They introduced crushed 400-nm-wide polystyrene beads and freshwater into one side of the device, while injecting saltwater through another inlet. At the opposite end of the 1.7-cm-long device, the researchers collected the output. The team tested different flow rates, replicating the salt gradient and water movement they measured in an estuary on the French Caribbean island of Guadeloupe. Nanoplastic aggregates up to 10-μm wide were detected within the zone of highest salt concentration in the flow chamber, regardless of how fast the water was moving. At the highest flow rate, only 12% of the nanoplastics were collected in the outlets; the remaining particles either clumped together and sank in the flow chamber or formed floating aggregates that stuck to the chamber's sides. The researchers say their results show estuaries and other coastal environments may filter out nanoplastics before they can enter the ocean.

The authors acknowledge funding from the French Agency for Research.

The abstract that accompanies this paper can be found here.

For more of the latest research news, register for our upcoming meeting, ACS Spring 2021. Journalists and public information officers are encouraged to apply for complimentary press registration by emailing us at newsroom@acs.org.

The American Chemical Society (ACS) is a nonprofit organization chartered by the U.S. Congress. ACS' mission is to advance the broader chemistry enterprise and its practitioners for the benefit of Earth and its people. The Society is a global leader in providing access to chemistry-related information and research through its multiple research solutions, peer-reviewed journals, scientific conferences, eBooks and weekly news periodical Chemical & Engineering News. ACS journals are among the most cited, most trusted and most read within the scientific literature; however, ACS itself does not conduct chemical research. As a specialist in scientific information solutions (including SciFinder® and STN®), its CAS division powers global research, discovery and innovation. ACS' main offices are in Washington, D.C., and Columbus, Ohio.