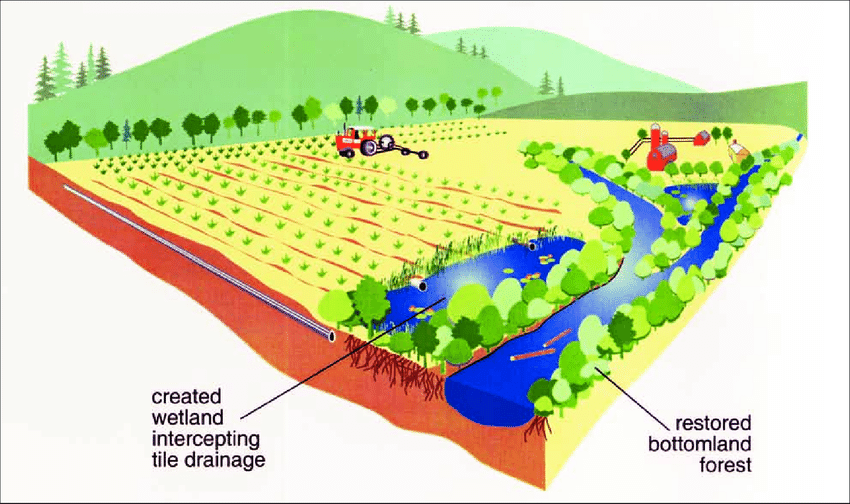 I have personally spent many hours with Dr. Donald Hey discussing nutrient loss from farm fields, the loss of wetlands along our major rivers and their tributaries and how effective constructed agriculture wetlands would be to alleviate the down river flow of nitrogen and phosphorus into the Gulf of Mexico.  Thus a hypoxic (oxygen free) zone is created for fish and other ocean creatures in need of oxygen to live.

First Mr. Nowlan mentions nitrogen (N), phosphorus (P), and potassium (K), the three main fertilizer nutrients and pesticides applied to farmland as the major contributors of Gulf hypoxia.  Gulf hypoxia only deals with N and P, which spurs the growth of plants in the water.   N is water soluble and it moves down through the soil profile during the growing season and leaves a field as surface (runoff) and subsurface water (tile water).  P is trapped within the clay mineral lattice work and primarily leaves the field with soil erosion.  Excess P can leave the field in the tile water as dissolved reactive P.  K is a cation and binds to the negative charged clay particle and very little leaves the field.

The success of “nutrient farming” will depend on the trading of credits between farmers, who can prove that they are cleaning up water of N and P from the farms, and municipalities who need the credits to meet permitting guidelines for clean water from their sanitary sewer systems.  Dr. Hey proposes creating constructed agriculture wetlands on the backside of the levees along our major rivers and their tributaries which flow to the gulf.  These constructed wetlands would be filled with river overflow during floods or pumped in water during periods when there was not flooding.   These wetlands would serve to clean the waters before it is pumped back into the rivers downstream.   Anywhere we now have leveed rivers, nutrient trading is possible.  I have proposed to Dr. Hey that the drainage districts of Illinois, where the surface and drainage tile water from a drainage district, could also be funneled into a constructed agriculture wetland.  Ultimately all of the farmland drainage water, with the exception of a few streams going into Lake Michigan, flows down the Mississippi River and into the Gulf of Mexico.