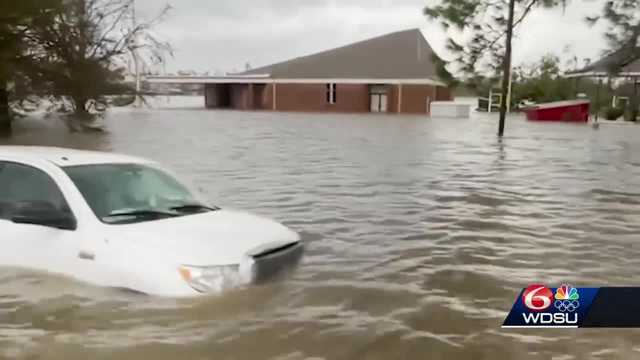 The crisis of Louisiana’s eroding coast has been laid bare by Hurricane Ida, which erased much of the remaining marshland and barrier islands between Lower Jefferson Parish and the Gulf of Mexico.

Lafitte Mayor Tim Kerner Jr. compares aerial photos from before the storm to images taken in the weeks after Ida and has trouble reconciling the two. He was raised in Lafitte and knows the bayous, inlets and marsh as well as his own back yard.

“Where I grew up — it was unrecognizable,” Kerner, Jr said. “Places I grew up playing and fishing it's completely-- it's been leveled by Hurricane Ida.”

Kerner said the condition of the coast before the storm left Lafitte more vulnerable than it should have been when Ida hit.

“There are a lot of reasons - most of them are government mistakes,” Kerner said. "The levees along the Mississippi River with no plan to feed the coast; oil companies dredging tens of thousands of canals without repairing them, that expedited the saltwater intrusion that destroyed our coast. And look, it also doesn’t help to have the largest pump station in the world pumping right north of us and filling this place up with that saltwater.”

That pump station is the $1 billion West Closure Complex built after Hurricane Katrina. According to the Army Corps of Engineers, which designed and built the complex, it reduces the risk of storm damage in three parishes on the West Bank of the Mississippi River: Orleans, Jefferson and Plaquemines parishes. But the pumps are just three miles from Lafitte and drain directly toward the town, which sits outside of federal levees.

Video recorded by the Lafitte fire department during the height of Hurricane Ida’s surge shows floodwater lapping over local levees. Efforts to keep the water out were just inches too short.