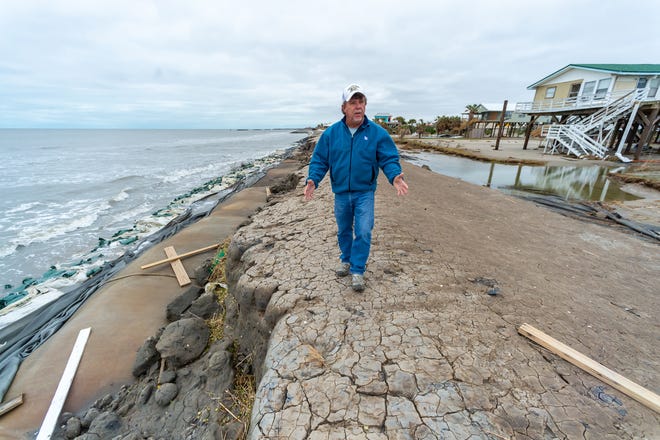 Kelli Scardino's little restaurant, Yum's Cafe, sits on one of the highest and widest spots on this exceedingly low and narrow island. When it comes to hurricanes, Yum's is what constitutes as Grand Isle's "safe ground."

But one more beach-devouring storm, and that could change. Hurricane Zeta, the fifth named storm to strike Louisiana this year, made a direct hit on Grand Isle, ripping off roofs, knocking down utility poles and breaking through the island's already severely damaged storm levee, a structure mostly made of sand that was built in 2014.

In at least seven spots, the strong Category 2 storm's waves blasted through the levee and pushed beach sand and sandbags, piled on the levee during other recent storms, more than 500 feet, through yards and driveways and reaching far as the island's main road, where Scardino watched the hurricane from Yum's.

"There's nothing protecting us now," Scardino said. "Our restaurant is going to be waterfront property if something isn't done soon."

That something may not happen until after this year's hurricane season, which is set to conclude at the end of the month. The state Coastal Protection and Restoration Authority plans to finish the levee's slow-going emergency repairs sometime before January. The levee breaches may add to or complicate the work, prompting a new round of damage assessments that took place shortly after the hurricane hit on Wednesday.