Gulf of Mexico
via U.S. Fish and Wildlife Service 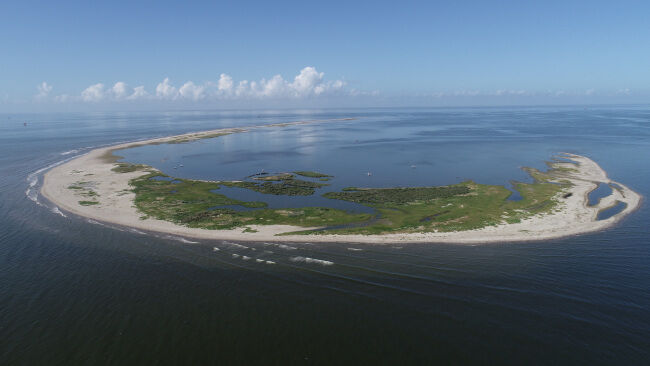 LA - The First Sand Is Being Pumped on North Breton Island, a 'Vital' Barrier Island for Birds

Work has begun to save one of the state's top brown pelican rookeries and seabird habitats from slipping into the Gulf of Mexico.

Funded mostly with BP settlement money from the Deepwater Horizon oil spill, the $75 million project will enhance 400 acres of dune, beach and marsh to North Breton Island, a barrier island located 30 miles off of Louisiana's coast in the Breton Sound just south of the Chandeleur Islands.

The island and the hundreds of bird species that live on it were heavily oiled during the 2010 disaster. The land restoration, which began last month, was one of the first projects approved in the spill's 2014 damage assessment and is the final piece of the four-part Louisiana Outer Coast Restoration project.

“This project has been a long time in the making, and we are thrilled to see construction begin,” said Bren Haase, the Louisiana Coastal Protection and Restoration Authority's executive director in a prepared statement. “Restoring North Breton Island is essential not only for the birds that call Louisiana home but for the many other fish and wildlife resources that make Louisiana the Sportsman’s Paradise. Without this project, protection for our coastal communities and a home for our birds would be lost.”

The island is part of the Breton National Wildlife Refuge, the second oldest refuge in the nation. President Theodore Roosevelt created it in 1904 to protect what's now recognized as a globally important bird habitat from hunters that had devastated bird populations there.