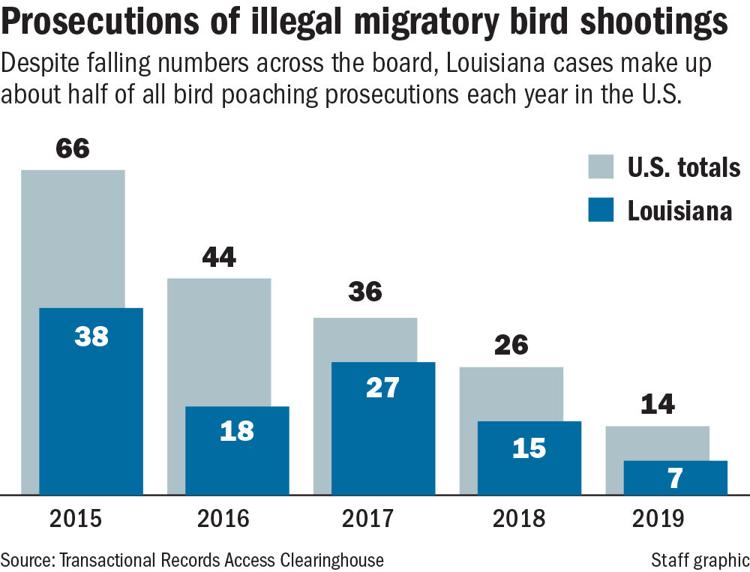 In 2016, Kaenon Constantin and his nephew shot two cranes in Acadia Parish.

Upon inspecting one of the birds, they discovered it had color bands and a transmitter on its legs. The bird was a whooping crane, the tallest bird in North America and among the most endangered.

Constantin and his nephew were unable to find the second bird. They took the first one home. There, they cut off its legs with a kitchen knife and threw the transmitter into a crawfish pond.

There have been more endangered whooping cranes shot in Louisiana than any other state. While poaching of all kinds of migratory birds in the state has drastically declined over the past 20 years, Louisiana still leads the nation in illegal bird shooting prosecutions. That further complicates the already-difficult process of saving endangered populations like whooping cranes.

At his sentencing hearing in Lafayette, Constantin apologized, calling his actions “ignorant and unnecessary.”

By killing two whooping cranes, Constantin further jeopardized efforts to build back the state’s population, driven to near extinction in the 1940s. Louisiana now has 80 birds in its flock, but 12 whooping cranes have been killed in Louisiana since the reintroduction program began in 2011. That means poaching accounts for almost 25% of the deaths in which a cause could be determined.

Wildlife advocates have been pressing the courts to hand down stiffer penalties for such crimes to deter people from continuing to illegally shoot birds. Poaching is a stain on the reputation of a state that proudly calls itself the “Sportsman’s Paradise,” said Danny Siefker, a federal prosecutor in the Western District of Louisiana.

“This is something that has to change,” he said. “If what they say is true about Louisiana leading the nation, it’s an embarrassment.”