Gulf of Mexico
Seth Blitch of The Nature Conservancy holds a piece of oyster reef from a restoration project in southwest Louisiana’s Calcasieu Lake that used gabions, or wire cages, to provide substrate for oysters to grow on and become natural reef. Such efforts help recover habitat, provide oyster seed, and create living shorelines that improve water quality and buffer coasts from storms. Montana Ankner The Nature Conservancy 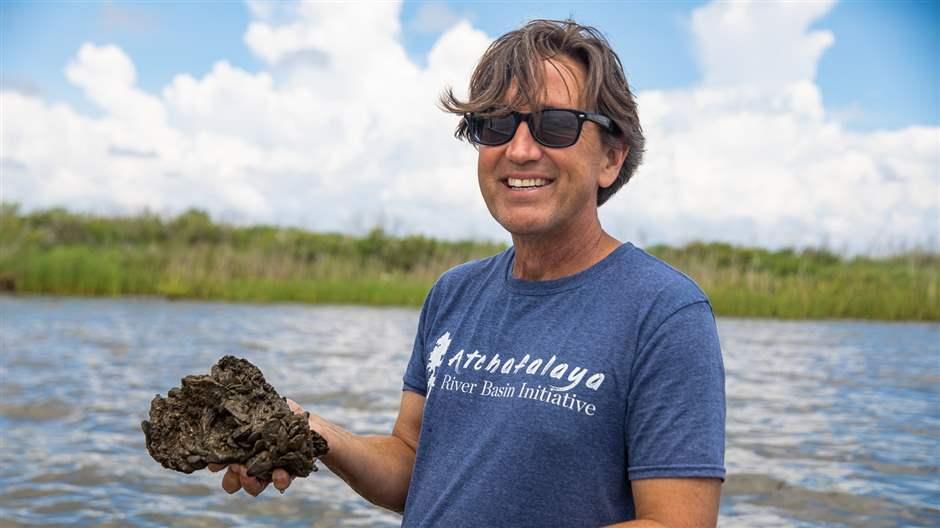 LA - National Estuarine Research Reserve in Louisiana Would 'Give Visitors a Sense of Place, a Connection' to Coastal Habitats

Earlier this summer, Louisiana nominated a portion of the Atchafalaya Basin—often referred to by coastal scientists and conservationists as “America’s wetland”—to become the country’s 31st site in the federal National Estuarine Research Reserve System (NERRS). This network of protected estuaries and other habitats in coastal and Great Lakes states and territories supports research, stewardship, education, training, and recreation within these vital ecosystems.

Estuaries are areas where freshwater from rivers and streams mixes with saltwater from the ocean. The Atchafalaya Basin encompasses almost 1 million acres of forested wetlands and is the heart of Louisiana’s abundant seafood industry and celebrated Cajun culture.

These places have great value. They boost local communities by supporting recreationally and commercially important marine life and by buffering coasts from storms and sea level rise.

Seth Blitch is director of coastal and marine conservation with the Louisiana chapter of The Nature Conservancy and chaired the Louisiana NERRS site screening committee, which selected the Atchafalaya Basin for nomination as the state’s first reserve. Blitch, a Florida native, has worked on coastal conservation issues in the Gulf of Mexico for almost three decades, including as director of the Apalachicola National Estuarine Research Reserve in Florida from 2003 until 2011.

This interview has been edited for clarity and length.

Q: How did you become interested in coastal conservation?

A: I spent a lot of time on the coast as a child. My dad, my brother, and I fished around the Chassahowitzka River area [on Florida’s Central Gulf coast] and caught lots of redfish and trout. But more than that, we just had an excellent time together on the water. My dad has always been a great steward of the land, but he’s also someone who just loves being out in nature. So, I came by it naturally because that was the example I had and because it's really liberating to be outdoors. As a child, I felt free and unencumbered. To this day, I still do.

Q: “National Estuarine Research Reserve System” is a bureaucratic mouthful. What should people know about NERRS?

The reserves are pretty remarkable because they really give visitors a sense of place, a connection in terms of how the river meets the sea and forms the estuary. And then each reserve gets the power of being part of a larger, well-integrated research system throughout the country.

Q: How do they benefit the public?

A: Nearly all reserves participate in what’s known as the systemwide monitoring program, which looks at changes in water quality and quantity. That data gets reviewed every year and is used both in the resource management of that specific reserve and across the entire system. In Apalachicola, it was useful in not only managing the reserve but also in communicating to the public, whether they were oyster fishermen or people interested in going to the beach.

And research reserves have great educational programs, both for K-12 students and coastal training programs that usually target more professional audiences. They show what's unique about that estuary, why oyster reefs matter, why those seagrass beds are important, or why a certain river maintaining its hydrology matters to a coastal community’s livelihood. There's a lot of science that happens, and when you're in the boundaries of the research reserve, the science is really evident.

Q: Do you have any particularly memorable experiences from a NERRS site?

A: I have so many, just from Apalachicola. There were moments when I would have a break and I would look around and see our staff working with people on different games or programs, and I’d recognize most of the people there as part of the community, people who were local. And I’d think, “We're doing the right thing. We're doing a good job.”