Gulf of Mexico
An illustration released Wednesday, Nov. 17, 2021, shows the latest design for the proposed Mid-Barataria Sediment Diversion, which would funnel a maximum 75,000 cubic feet per second of sediment and water from the Mississippi River into the Barataria Basin. LOUISIANA COASTAL PROTECTION AND RESTORATION AUTHORITY ILLUSTRATION 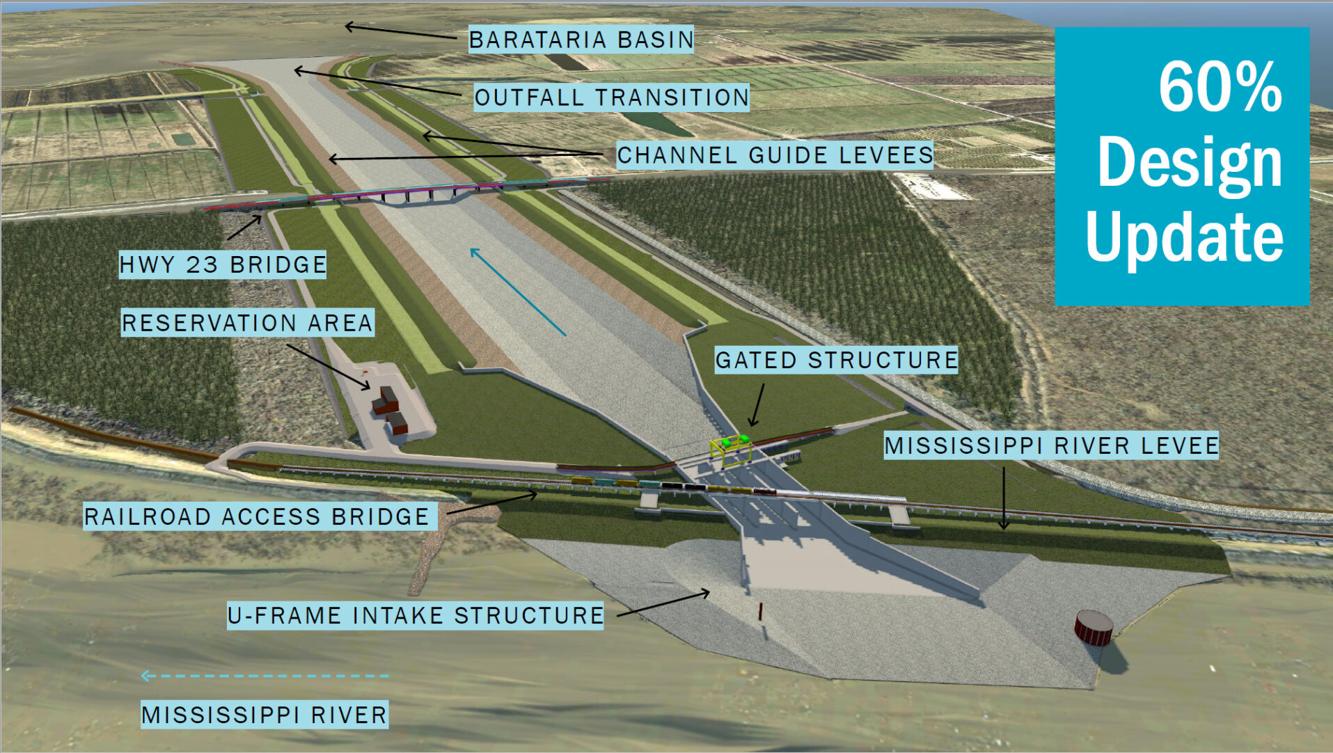 An unprecedented project to fight land loss devastating Louisiana’s coast by diverting sediment and water from the Mississippi River into Barataria Basin took a major step toward definitive approval on Monday with the release of a final environmental assessment by the U.S. Army Corps of Engineers.

The Corps released the lengthy report on the $2 billion Mid-Barataria Sediment Diversion Project. It breaks down how the new flow of freshwater and sediment for as much as half the year into the basin will create more than 20 square miles of new land during its first 50 years of operation.

It also looks at how it will reduce potential flooding for New Orleans area west bank communities, slightly increase the potential for flooding for communities downstream and significantly affect fisheries, oysters and bottlenose dolphins by increasing freshwater levels in the basin.

State officials view the project as the most important among the state's ongoing coastal Master Plan in reducing the effects of subsidence and sea level rise on land loss, while also recognizing its potential effects on fisheries and residents, which will be offset by $380 million in projects to mitigate damages.

“This is a monumental moment for the state and the state’s coastal program,” said Chip Kline, chairman of the state Coastal Protection and Restoration Authority. “It has been told to us by members of the Biden administration that this is the largest coastal restoration project in the country, and the largest of its type anywhere in the world.”

He said Monday’s release of the report put the state on the “two-yard line” when it comes to receiving the final go-ahead to move forward with the project. Permits from the Corps allowing construction, and by federal and state BP oil spill trustees on funding the project, could now come as soon as December.

Those approvals will be based on the conclusions in this final version of the study. It provides a highly detailed look at the environmental impacts of the project, ranging from its huge land-building potential to the challenges it poses to the commercial fishing industry in Barataria Basin.

It follows up on a draft environmental impact report issued last year and addresses more than 40,000 public comments.

The project has been decades in the making and the state views it as having game-changing potential when it comes to the fight against coastal land loss. It would essentially mimic the processes that created southern Louisiana in the first place, sending millions of tons of sediment into the basin each year through the diversion.