Gulf of Mexico
The Mid-Barataria sediment diversion project aims to direct more than 12% of the Mississippi River's flow into Bataraia Bay in southeast Louisiana. Credit: NOAA 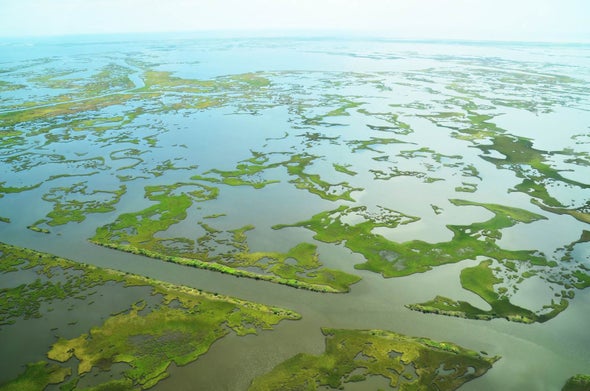 A massive coastal restoration project in Louisiana could test whether new wetlands can be created faster than they’re disappearing under waves and rising seas.

The $1.5 billion project would redirect more than 12% of the Mississippi River’s flow into Barataria Bay, a nearly 600,000-acre expanse of degraded marsh that’s drowning in salt water. The proposed plan would deposit millions of tons of land-building sediment in the basin over the next 50 years.

“This is the largest coastal restoration project of its kind, anywhere in the country,” Chip Kline, chairman of the state Coastal Protection and Restoration Authority, said of the Louisiana project. The idea was proposed in 2013, three years after the catastrophic BP PLC oil spill from its Deepwater Horizon production site.

The basin, which was walled off from the Mississippi River by levees about 100 years ago, is seeing some of the highest rates of land loss on the planet. Rising seas are consuming wetlands and turning brackish waterways salty, endangering essential habitat for fish and shallow-water species.

The accelerating process is made worse by hurricanes, maintenance of navigation channels and ongoing damage from a network of narrow canals cut into the marsh for oil and gas development, experts say.

The Barataria diversion project could determine whether portions of Louisiana’s coastline can be saved—and whether similar techniques can be used elsewhere.

At the heart of the project are “adaptive management” principles, which hold that targeted actions can help restore or mimic natural conditions before people altered the landscape and ecosystems. Just as the Mississippi River was redirected a century ago by the Army Corps of Engineers to reduce flooding and accommodate commerce and development, it now must be reengineered to mimic past conditions, experts say.