Gulf of Mexico
via Houma Courier 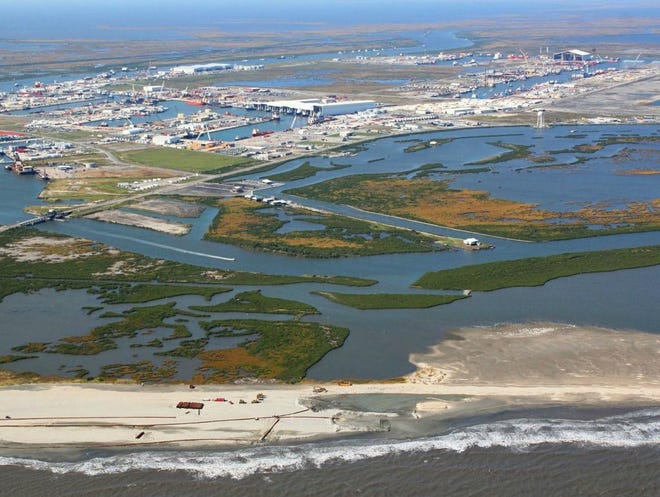 LA - Louisiana coastal restoration curbed by too little sediment; upriver states have too much

Tucked between South Dakota and Nebraska is a whole lot of what could be Louisiana.

A growing mountain's worth of Missouri River silt and sand that would have flowed to the Mississippi River and down to Louisiana has instead been trapped behind a border dam 85 miles southwest of Sioux Falls. The pile pressed against Gavins Point Dam won't be spreading across the Mississippi Delta, where it could help rebuild Louisiana's unraveling coastline.

"How much is there now is a number that can't be comprehended," said river engineer Rollin Hotchkiss.

But the rate at which the sediment pile grows is an exhaustively studied and "mind-boggling" fact. About 5 million tons of sediment flows into the reservoir behind the dam each year. That's enough material to fill the Mercedes-Benz Superdome to the rafters. Pour that much sediment across the Louisiana coast, as the state did during the restoration of Scofield Island in 2013, and it would create more than a square mile of new land.

And Gavins Point is only the smallest in a chain of six dams built between the 1940s and 1960s to tame a river that drains a vast basin stretching into 10 states and two Canadian provinces. While the Gavins dam reservoir is filling up fast and causing a range of problems — from flooding roads to raising the groundwater table — the upriver reservoirs have much larger capacities that could take on sediment well beyond the next century. The full load of trapped sediment on the Missouri is almost unfathomable.

Meanwhile, Louisiana is starving for the stuff.

"The Mississippi and the sediment it carries is the lifeblood of Louisiana's coastal wetlands," said Bren Haase, executive director of the state Coastal Protection and Restoration Authority. "It's what built southeast Louisiana over the last 7,000 years."