Gulf of Mexico
Map showing the location of the MRGO, GIWW, the two closures at the rock dam and the surge barrier as well some of the large neighborhoods affected by the storm surge from Hurricane Katrina. 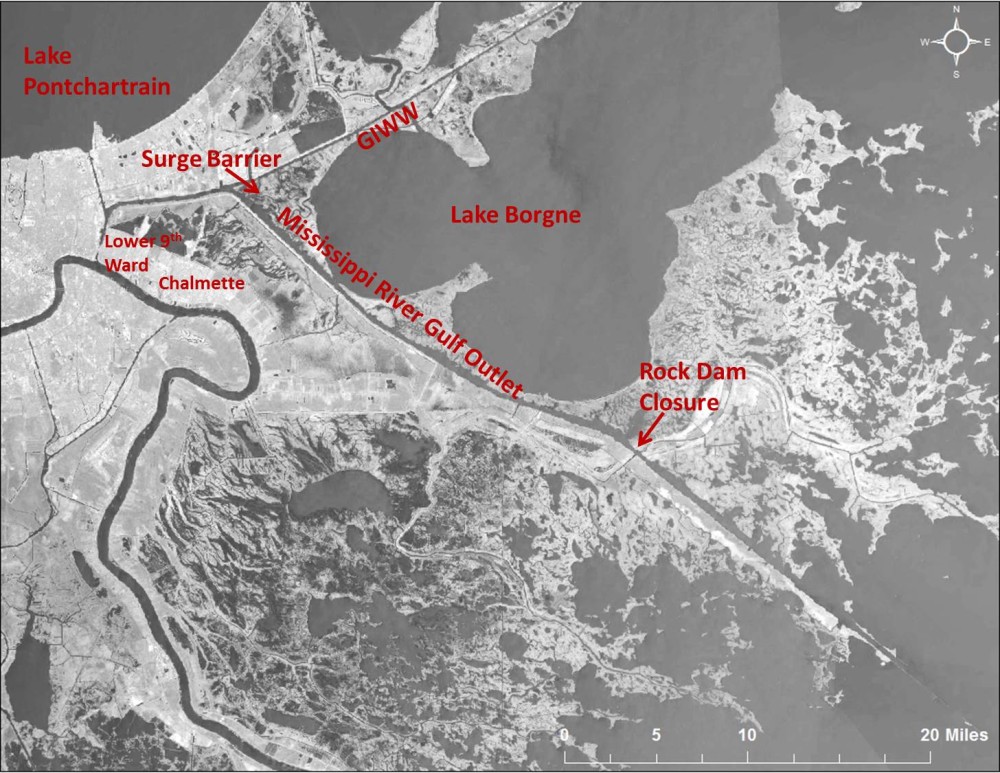 Kennedy’s support for the 2022 Water Resources Development Act (WRDA) helped to secure this win for the people of southeast Louisiana.

The MRGO destroyed over 600,000 acres of coast surrounding the Greater New Orleans area. It also allowed saltwater to flow from the Gulf of Mexico inland, destroying more than 27,000 acres of Louisiana’s wetlands, which functioned as a natural storm buffer that Louisianians rely on.

“We made a mistake building MRGO,” Kennedy said.

“In our Water Resources and Development Act, which this Senate just passed . . . we have, at long last, done something that I’ve been working on since I got here from day one . . . We authorized the Corps of Engineers to begin implementing the Mississippi River Gulf Outlet restoration plan . . . That means the Corps is going to fill it in and start repairing the wetlands and other ecological and environmental damage that was done when we built this channel. It will not cost the people of Louisiana one single penny.

The most recent estimated cost of the MRGO restoration was $3 billion in 2012. More damage to the wetlands and marshes has occurred since 2012, so the $3 billion estimate likely falls below the current cost to restore the area.

In 2006, the USACE began a study to develop a plan to de-authorize deep-draft navigation on the portion of the MRGO between the Gulf Intracoastal Waterway (GIWW) and the Gulf of Mexico. The goals of the study were to develop a comprehensive plan to de-authorize deep-draft navigation, evaluate any navigation functions that should be maintained, identify measures for hurricane and storm damage reduction, and to refine the plan to be fully integrated and consistent with the Louisiana Coastal Protection and Restoration (LAPCR) Plan.

The final Deep-Draft De-authorization Report was sent to Congress on June 5, 2008, officially de-authorizing the channel from the GIWW to the Gulf of Mexico and authorizing the construction of a rock closure structure, removal of aids to navigation, and release return of real estate easements.

The closure of the MRGO navigation channel is a direct result of the Deep-Draft De-authorization Report submitted by the USACE to Congress in June 2008. Submission of the report officially de-authorized the channel from the GIWW to the Gulf of Mexico and authorized the construction of a rock closure structure, removal of aids to navigation, and disposition of real estate easements.

In late July 2009, Pine Bluff Sand & Gravel Company from Pine Bluff, Arkansas completed placing the last loads of armor stone onto the Mississippi River Gulf Outlet rock closure structure. The rock structure was built 1,500 feet southeast of Bayou La Loutre in St. Bernard Parish. Final construction specs included the placement of approximately 352,000 tons of stone materials (approximately 126,000 tons of stone came from the south jetty at the end of the MRGO channel) to build the structure with a 12 foot crown, a 450 foot bottom width, and a top height of +8 feet NAVD 88. Channel bank tie-ins are 50 feet wide extending approximately 150 feet onto the south bank and 250 feet onto the north bank.