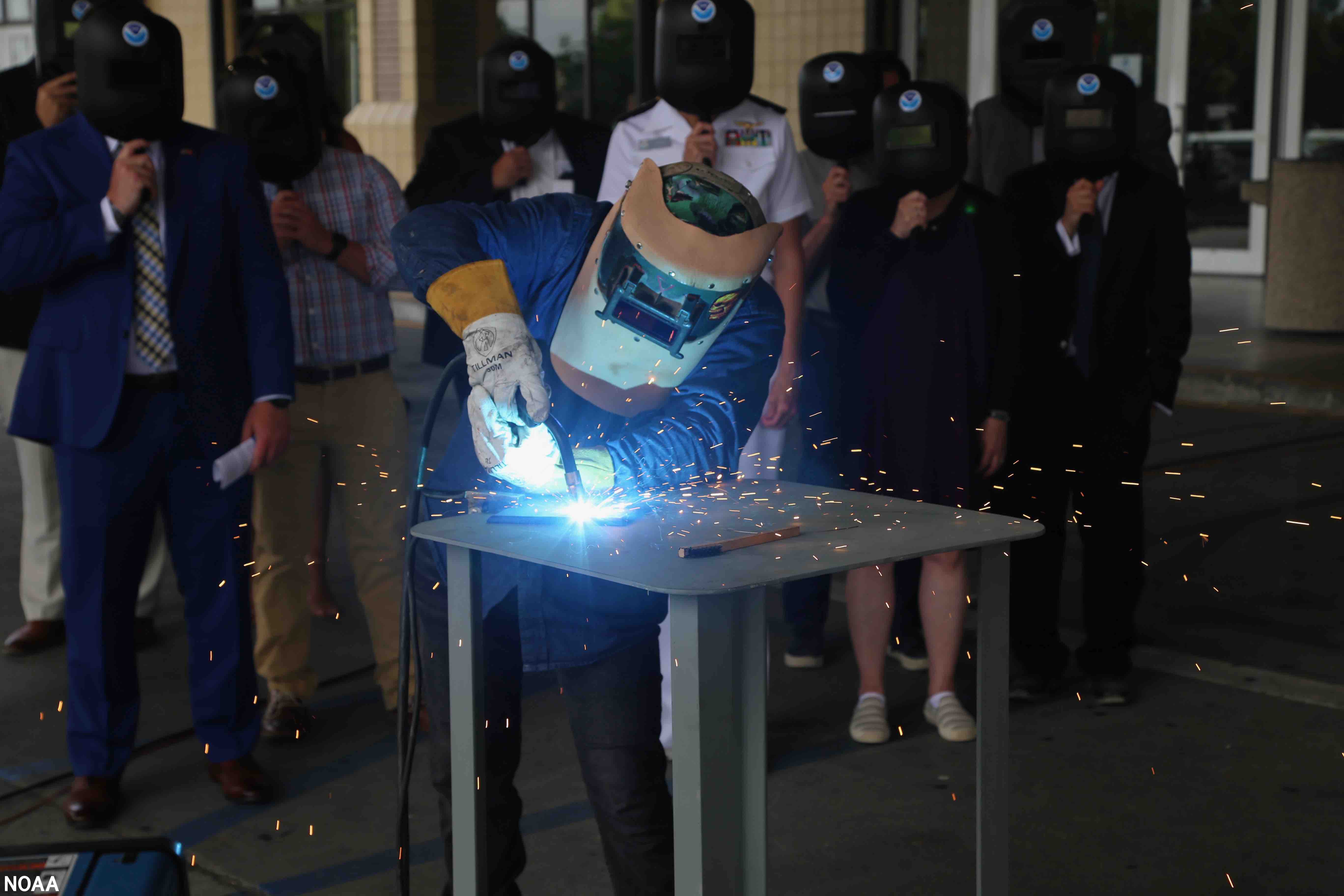 During the ceremony, the initials of the ship’s sponsor, Linda Kwok Schatz, wife of U.S. Sen. Brian Schatz of Hawaii, was welded onto a steel plate that will be incorporated into the ship during construction. Although Oceanographer does not have a traditional keel due to modern shipbuilding methods, today’s ceremony was in keeping with centuries-old maritime tradition that formally recognizes the start of a ship's construction.

"NOAA ships play a vital role in meeting the large and growing demand for oceanic data, critical for protecting lives and livelihoods," said NOAA Administrator Rick Spinrad, Ph.D. "The new capabilities of Oceanographer will contribute to NOAA's sustained leadership in providing reliable, high-quality data to the nation, driving the New Blue Economy and doing so more efficiently than ever before."

“Today’s keel-laying ceremony marks a major step forward both in the construction of Oceanographer and the revitalization of NOAA’s ship fleet,” said Rear Adm. Nancy Hann, director of NOAA’s Office of Marine and Aviation Operations (OMAO) and the NOAA Commissioned Officer Corps.

Oceanographer is one of two ships being built for NOAA by TMCoffsite link. To support NOAA's goal of reducing the agency's carbon footprint, Oceanographer and its sister ship, Discoverer, will incorporate the latest technologies, including emissions controls and high-efficiency diesel engines that have potential to save 15,000 gallons per year for each vessel, resulting in an estimated reduction of approximately 5,700 tons of carbon dioxide.

“This efficiency is a success for the government, Thoma-Sea Marine Constructors and our planet, providing the lowest impact to the environment while studying the oceans we depend on,” said TMC Managing Director Walter Thomassie. “It is with much enthusiasm that we begin this phase of the project.”

Oceanographer will continue the legacy of its namesake. The first Oceanographer served in the NOAA fleet from 1966 to 1996 and sailed throughout the world as it studied all aspects of oceanography.

Oceanographer will be homeported in Honolulu, Hawaii. The ship is expected to join the NOAA fleet in 2025, with Discoverer to follow in 2026.

“I am confident this new vessel will serve Hawaii and our country well,” said Linda Kwok Schatz.

NOAA’s fleet of research and survey ships is operated, managed and maintained by OMAO. NOAA ships are crewed by NOAA Corps officers and civilian professional mariners.