Gulf of Mexico
Credit: Sophia Germer/The Advocate | The Times-Picayune Court documents at Matthews’ home, including the notice that she was being sued by the state 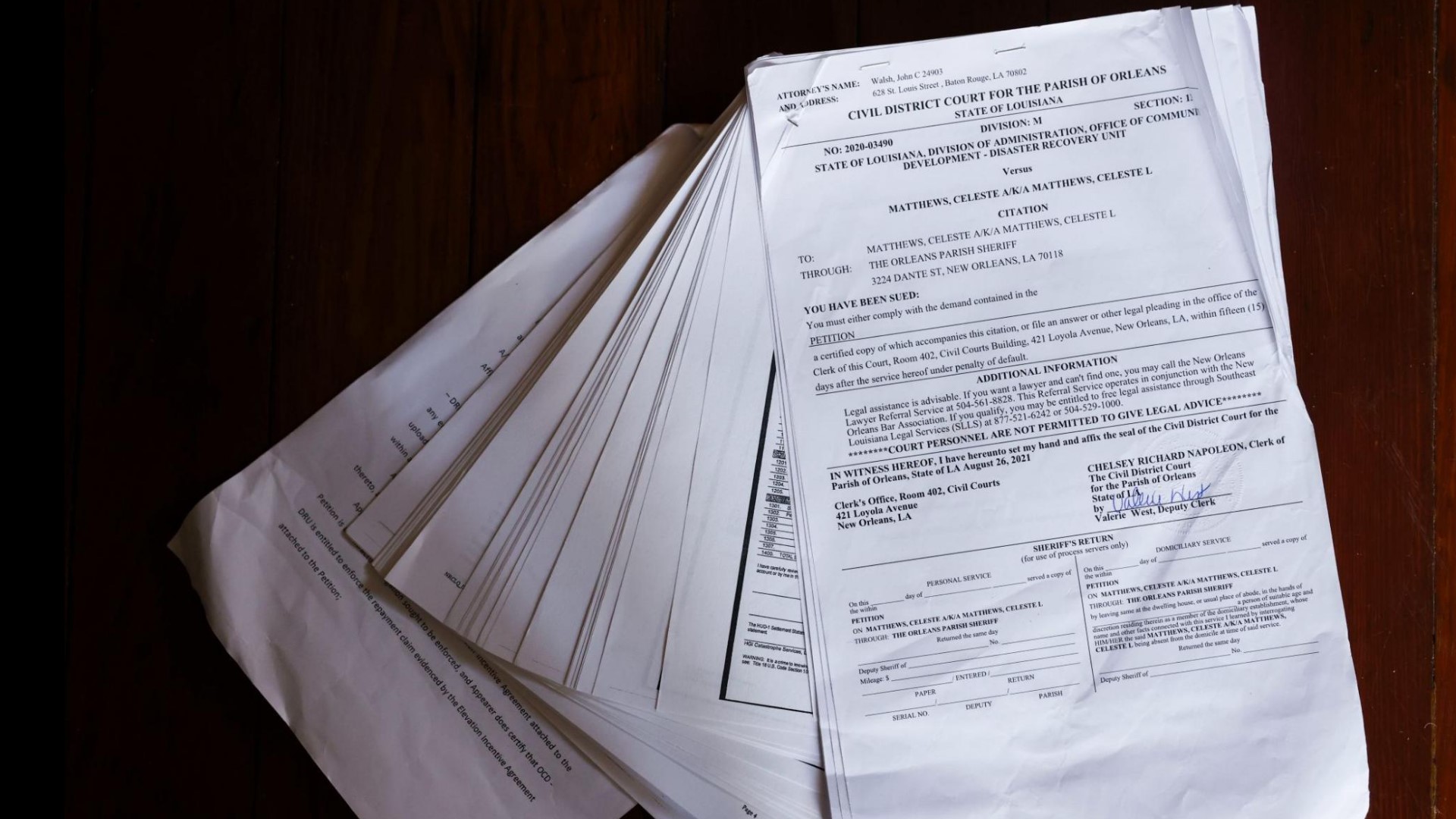 After Hurricane Katrina, struggling homeowners said, they were told not to worry about the fine print when they received grants to elevate their homes.

Celeste Matthews spent last summer’s 16th anniversary of Hurricane Katrina in a panic at her cousin’s house in Uptown New Orleans as another monster storm, Hurricane Ida, roared through the city. With every gust, she was terrified the windows would shatter.

The next day, she returned to her home in the Gert Town neighborhood to find part of the roof torn off. With the electricity out, she had to sleep with the windows open. Mosquitoes swarmed around her bed.

After three days without power, Matthews had her daughter drive her to Houston. A week later she returned home, closed the curtains and sank into a depression, spending the next several days in bed.

One morning, she awoke to a knock on the door. An Orleans Parish sheriff’s deputy was holding a stack of court papers. Matthews, her hands shaking, read the first page:

Below that: “YOU HAVE BEEN SUED.”

When the levees broke during Katrina in 2005, Matthews’ home was engulfed in 5 feet of water. She lost everything. Like most poor New Orleanians, she struggled to cobble together enough money to rebuild.

In 2008, the state of Louisiana offered Matthews $30,000 through the federally funded Road Home program to elevate her house to reduce the risk of future flooding. But her home was still unlivable, and she desperately needed the cash for repairs. To her relief, she said, a Road Home representative told her she could use the elevation grant to instead pay for repairs. So she did.

Now, more than a decade later, the state wanted the money back.

Louisiana has sued about 3,500 people — about one in every nine people who received an elevation grant — for failing to use the grants to raise their homes after hurricanes Katrina and Rita struck in 2005.

The real problem, however, wasn’t that people ignored the rules, according to an investigation by The Advocate | The Times-Picayune, WWL-TV and ProPublica. It’s that the state Office of Community Development and a contractor it hired in 2006, ICF Emergency Management Services, mismanaged the program. For more than a decade since, the U.S. Department of Housing and Urban Development has insisted that the state recoup the money from people who are noncompliant.

Louisiana gave money to 32,000 homeowners starting in 2008. The state was in such a rush to distribute grants that no one verified they were eligible, according to the testimony of a top state official in one of the lawsuits. Some homeowners, like Matthews, said Road Home representatives told them they could use the money for repairs, even though that would violate their grant agreements.

Twice between 2013 and 2015, the state tried to fix the problem, changing the rules to allow spending on repairs and other expenses. But by then, so much time had passed that many homeowners couldn’t prove how they had used the money.