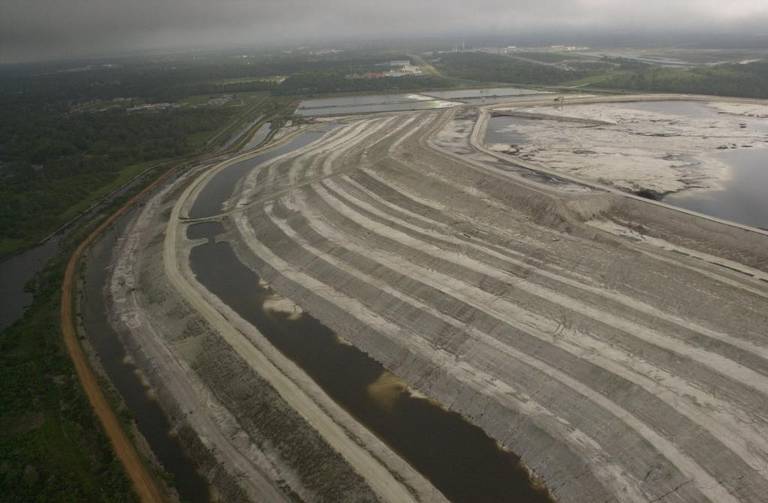 Superfund sites, like Mississippi Phosphates in Pascagoula, face big risks when major storms hit. However, preparations are taken for storms of all sizes. When Hurricane Sally was projected to hit Pascagoula, the 70 engineers, managers and construction workers at the former plant, which is the largest active superfund site in the Southeast, put their disaster plan into action.

He works at the Mississippi Phosphates Corporation superfund site, where the accumulated byproducts of decades of fertilizer production cover about 300 acres, spread over two piles called stacks. When a single inch of rainfall hits the area, it can generate up to nine million gallons of contaminated water.

It’s Abram’s job to make sure all of that water is held in a system of ditches and ponds and then treated before it can be safely released into the surrounding waters of Bayou Casotte.

If the system fails for any reason, like excessive rainfall, phosphoric acids, heavy metals and radioactive material can spill into the bayou, killing fish and vegetation. So Abram was watching the forecasts — storm surge of up to 11 feet and tremendous rainfall dumped for hours by the slow-moving storm — warily.

“They can say there’s going to be a half inch of rain, and I get nervous,” Abram said. “You’re not gonna outrun that rain.”

Studies have shown that climate change is likely to make hurricanes in the Gulf are stronger, slower, wetter, and more prone to rapid intensification. This season, Sally, moving at a snail’s pace and dropping tons of rain, and Delta, intensifying rapidly, were perfect illustrations of those trends.

When a storm hits an industrial plant or superfund site, home to contaminated land and toxic chemicals, the fallout can be especially dangerous, for people and the environment alike.

In the three coastal counties, perhaps no area is more vulnerable to serious environmental consequences due to hurricanes than Pascagoula, where Mississippi Phosphates’ neighbors include Chevron, Ingalls, Halter Marine and, until it closes at the end of the year, First Chemical.

Abram and his colleagues prepare as best they can. There have been no spills since the Environmental Protection Agency took over management of the site in 2017. Still, every forecast creates anxiety.

“Mother nature does what she wants to,” said Matt Vice, maintenance supervisor at the site. “We’re as prepared as you can prepare. An act of nature, you can’t control.”