Gulf of Mexico
LAKE CHARLES- The wind whips the 20x50 ft. tarp that Jafet Uscanga, 20, and his coworkers with Paul Davis Restoration based out of Houston were placing on Friday, August 28, 2020 in Lake Charles. Recovery efforts were underway after Hurricane Laura. CoreLogic, an analytics firm, is estimating insured wind and storm surge damage to homes and businesses in Louisiana will be between $8 billion and $12 billion. Chris Granger / The Times-Picayune / The New Orleans Advocate 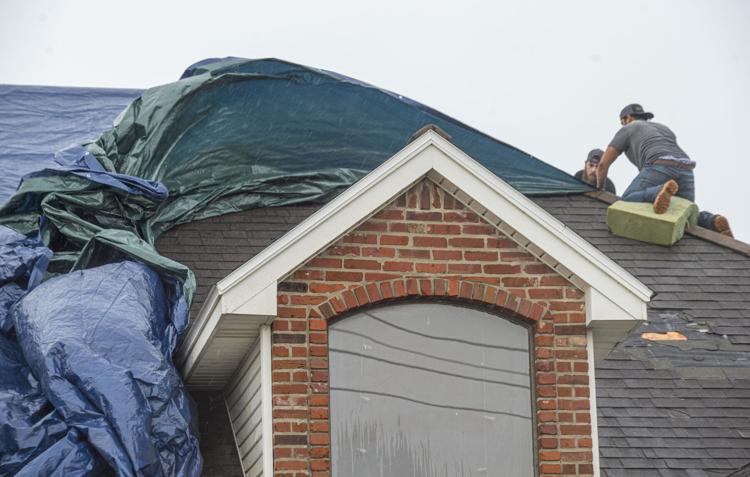 Insurance companies are getting a scope of the damage caused by Hurricane Laura, with an analytics already estimating insured damage in the state at $8 billion to $12 billion a day after the storm slammed into southwest Louisiana and left a trail of destruction northward through the state.

State Farm, the largest homeowners insurance company in Louisiana with about 278,000 policies, said Friday morning that 7,430 claims had been filed already. Another 750 auto claims also had been filed with the company.

Because so many homes still don’t have power, State Farm said it couldn’t estimate the value of the damage done by Laura.

The hurricane made landfall in Cameron Parish at 1 a.m. Thursday, with winds of 150 mph, making it the strongest storm to ever hit Louisiana. It traveled north, with hurricane-force winds as far away as Claiborne Parish.

CoreLogic, an analytics firm, is estimating insured wind and storm surge damage to homes and businesses in Louisiana will be between $8 billion and $12 billion. Similar types of damage in Texas are estimated at below $500 million.

Moody’s Analytics put the damage estimate in the $4 billion to $7 billion range, but said those were very rough numbers that should come into sharper focus in coming days.

Hurricane Rita, which hit southwest Louisiana in 2005, was estimated to have done $10.5 billion in damage. That would be about $13.3 billion, adjusted for inflation.

Farm Bureau of Louisiana said it received 17,000 claims related to Rita, which accounted for $230 million in damages. Avery Davidson, a Farm Bureau spokesperson, said because the company has restructured policies over the past 15 years and Laura and Rita had different paths, he can’t say if there will be more or less claims.