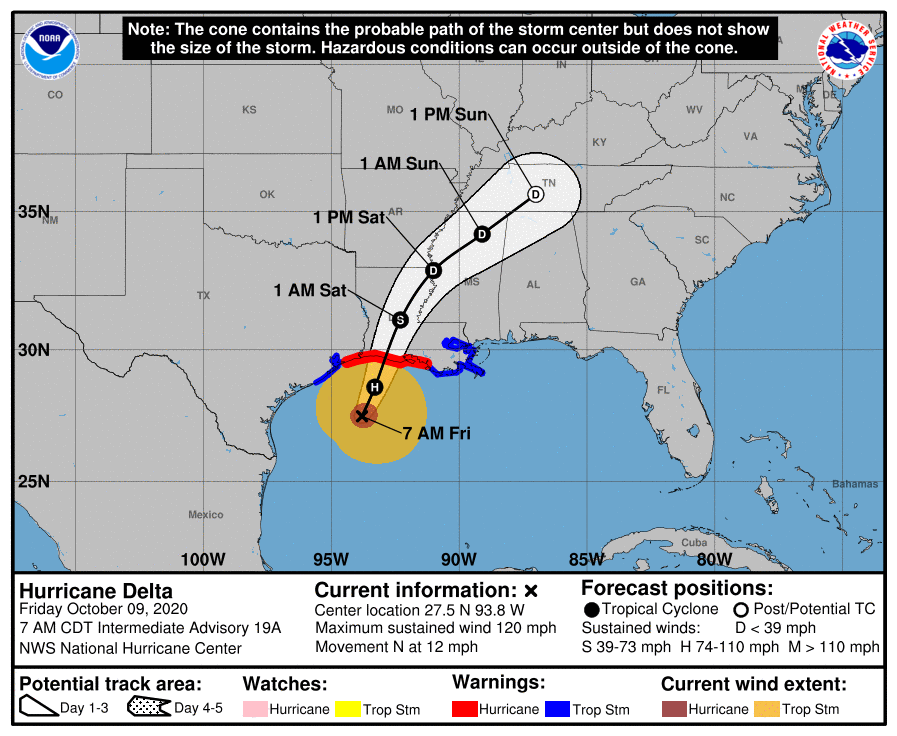 Hurricane Delta struck the Yucatan Peninsula region of Mexico yesterday, causing damage to properties including in the high-value Cancun resort region. The hurricane weakened slightly, but has since intensified again after emerging fully over the Gulf of Mexico.

Hurricane Delta is now forecast to continue intensifying as it moves across the Gulf of Mexico, with models suggesting it may get back to Category 3 major hurricane strength.

But, as it nears the U.S. coastline, wind shear is expected to pick up a little and cooler sea surface temperatures are expected to starve hurricane Delta of the fuel it needs to continue intensification, so the latest forecasts suggest a high Category 1 to mid-Category 2 hurricane landfall in the Louisiana area on Friday late afternoon to evening local time.

One point to consider with hurricane Delta, before any speculation on potential losses the storm may cause in the United States, is its relatively small size.

Hurricane force winds only extend 35 miles out from the centre of Delta and tropical storm force winds 140 miles, which makes it a relatively compact hurricane.

Of course, that doesn’t mean damage couldn’t be significant, but it does mean the landfall location will be a key determinant in how extensive a loss it could drive to insurance and perhaps reinsurance carriers, as well as insurance-linked securities (ILS) funds.

According to our sources, catastrophe risk models are projecting insurance and reinsurance market losses in the single digit billions of dollars at the moment.

Given where hurricane Delta is heading towards, there are similarities with hurricane Laura, in terms of landfall location.

However, hurricane Laura reached major status and intensified right up to landfall, so is estimated to have driven a low double-digit billion insurance and reinsurance market loss.

Hurricane Delta is unlikely to manage such a feat of intensification close to the shore, as the water temperatures are now much lower than they were when Laura was in the Gulf.

Another similar storm from earlier this season worth considering was hurricane Sally, which made landfall with sustained winds of around 105 mph, which is closer to where the top-end of forecasts suggest hurricane Delta will be.

Hurricane Sally’s insured losses have been estimated at up to $3.5 billion, although some of our market sources suggest the impacts in Florida are proving more significant than thought and this storm could go a little higher, in terms of loss.

Sally hit a much more populated and high-value, in terms of property, region of the Gulf Coast than where Delta is currently heading for.

So early modelled prognostications for a single-digit billion insurance and reinsurance market loss from hurricane Delta seem a sensible place to be looking at this stage.