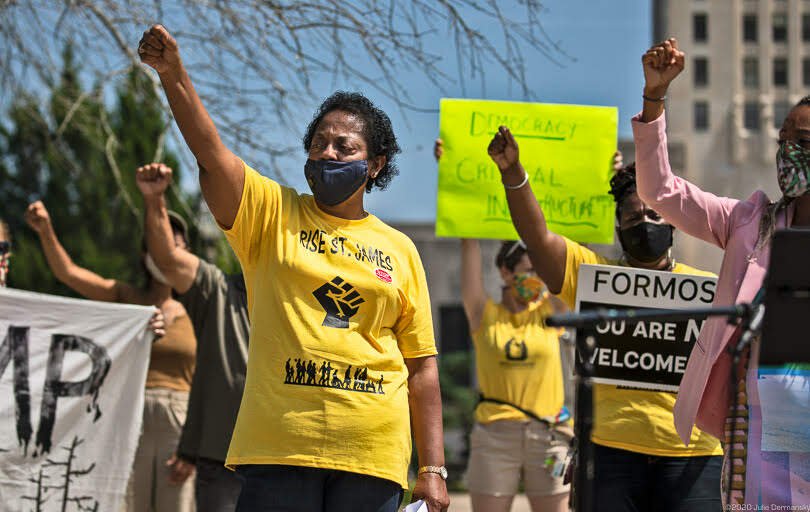 On Friday, June 12, Louisiana's Democratic governor John Bel Edwards is expected to sign off on a piece of legislation, House Bill 197, that would make it a more serious crime to trespass on Louisiana's so-called “critical infrastructure,” including the state's system of flood-control levees, fossil fuel pipelines, and sprawling network of petrochemical plants and refineries.

But if you ask Sharon Lavigne, founder of RISE St. James, a Louisiana community group, what House Bill 197 means to her, the answer that comes back isn’t about floodgates or water pumps or pipelines. It’s about the legacy of slavery in the United States — and how that legacy echoes in criminalization efforts today.

“It means that I cannot go and visit the gravesites,” Lavigne told DeSmog on Wednesday, June 10, referring to recently discovered slave cemeteries on former plantations now owned by petrochemical giant Formosa. The Taiwanese company plans to build a massive plastics manufacturing site in St. James Parish where Lavigne lives. “I have to go on the property to go to the gravesite. That affects me because my ancestors are in that grave.”

House Bill 197, which was approved by the state’s legislature and is slated for the governor to sign or veto by Friday, would transform some types of trespassing — generally a low-level violation that leads to a small fine — into a felony carrying a minimum sentence of between three and 15 years. And because that sentence would be a mandatory minimum, a judge would have no legal discretion to lower the penalty for anyone convicted under that law, even in the face of compelling extenuating circumstances.