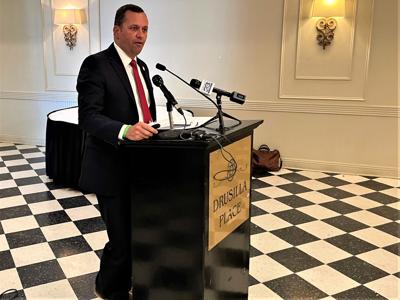 LA - Fixing Louisiana's receding coastline is a job that will never be finished, state official says

Louisiana is about halfway through spending $50 billion in a multi-year plan to address the state’s fast-receding coastline.

Since 2007, Louisiana has secured $23 billion for the projects that created 52,000 acres of new land, built 358 miles of new levees, and improved 60 miles of barrier islands, Chip Kline, the head of the CAPRA board told the Press Club of Baton Rouge on Monday.

Next year, the Louisiana Coastal Protection and Restoration Authority will be asking legislators to approve another State Coastal Master Plan, which also to the tune of $50 billion. Still, that won’t be enough.

“We are never going to get to a point in time where we are done,” said Kline, who in addition to running CPRA, is the director of Coastal Activities for the State of Louisiana and thus in charge of the coastal program.

“You are always going to have a long-term plan that looks at the long-term sustainability of the state of Louisiana,” he added. “We’re now on the third iteration of the plan, which was passed in 2017, and next one will be submitted to Louisiana Legislature in 2023 that, right now, is looking like another $50 billion plan” for projects over tens of years.