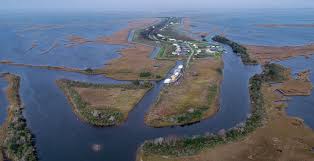 LA - Editor’s opinion: A look at the big picture of a small island

The Gulf, science has established beyond a reasonable doubt, is coming for the rest of us.

The story of Isle de Jean Charles’ demise has been told many times, but it’s worthwhile for all of us to be reminded of the big picture every now and then.

A two-day series posted today to houmatoday.com and dailycomet.com does just that. Andrew Yawn of Gannett Louisiana, a network of newspapers that includes The Courier and Daily Comet, is among the latest to chronicle the effort to help residents of the eroding, flood-prone island off southeastern Terrebonne move to a new home about 40 miles north in Schriever.

Over time, the story of this tiny sliver of land and the American Indian people who call it home has become more dire. It is an emotional story that came to the fore during Hurricane Barry in July, when a Coast Guard helicopter lifted nearly a dozen residents to safety as 8 feet of water swamped the island, putting at least five houses under the Gulf of Mexico’s tides.