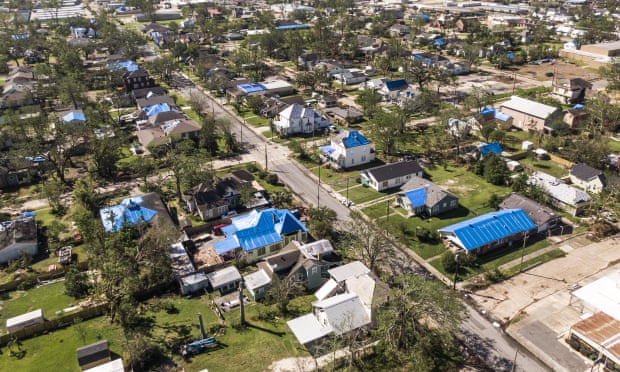 Louisiana on Sunday was picking up the pieces after Hurricane Delta swept through, wreaking havoc on a region already devastated by Hurricane Laura six weeks ago.

Two people were confirmed on Sunday to have been killed after Delta made landfall on Friday evening near the coastal town of Creole, with top winds of 100mph. One of the victims died in Louisiana, and another in Florida.

In Louisiana an 86-year-old man from St Martin Parish died in a fire that started after he refuelled a power generator in a shed, without letting it cool down first, the governor said.

In Florida, Dakota Pierce, a 19-year-old tourist from Illinois, drowned after being caught in a rip current unleashed by the remnants of Delta in the Gulf Coast.

The Okaloosa County sheriff’s office said that witnesses went in to help the tourists in Destin, Florida, but also struggled with the rough waves before they were rescued by lifeguards.

Delta on Friday and Saturday moved over Lake Charles, a city where Hurricane Laura damaged nearly every home and building in late August. Aerial photographs showed the destruction around Creole, with roofs torn from buildings and communities surrounded by floodwater.

John Bel Edwards, the governor of Louisiana, said the storm dumped more than 15 inches of rain on Lake Charles over two days, and more than 10 inches on Baton Rouge. Edwards said 3,000 Louisiana National Guard soldiers were called up to clear roads and distribute meals and tarps.

An estimated 380,000 people were left without power on Sunday.