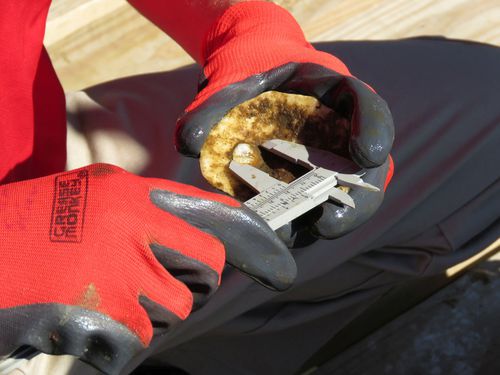 LA - Baby oysters are dying on Mississippi’s coast. Why are they surviving in Alabama?

Deluges along Mississippi’s coast have damaged the state’s current generation of oysters two years after fresh water from a Louisiana flood control structure all but wiped out live adults on reefs.

Deluges along Mississippi’s coast have damaged the state’s current generation of oysters two years after fresh water from a Louisiana flood control structure all but wiped out live adults on reefs. Fresh water also has hurt baby oysters in southeast Louisiana but doesn’t appear to have been a big problem in Alabama.

Mississippi oyster farmer Anita Arguelles said that at one point, fresh water was killing half of the small seed oysters that she and her husband buy to grow in raised cages at their French Hermit Oyster Co. farm off Deer Island — and those that survive were stunted.

“It has reduced the crop by at least 30% ... because they’re either too small or they’re dead,” Arguelles said.

“What we’re seeing is a preponderance of runts,” she said. And they fill buckets with dead oysters each time they harvest live ones big enough to sell.

Another oyster farmer in the same area reported less serious damage. “We lost a little bit more than we usually do,” said Sam Yates of High Tide Oyster Co. “But as far as a terrible loss, no, it wasn’t really a bad year.”

At a high school in Bay St. Louis where students raise oysters to help restore Mississippi reefs, cages that might hold fist-sized clumps of oysters after a good summer and fall held only a few small babies in mid-November. Most of the recycled shells held only silt where tiny youngsters called spat had attached themselves at a hatchery.

These are bad signs — oysters in raised cages typically grow much faster and fatter than those on the ocean floor. They can reach adult size in less than a year in Mississippi, where those growing on the bottom would need two or three years. That’s because the water around them carries more food and because people regularly remove predators, competitors, and algae, silt and oyster waste that could slow the bivalves’ growth by reducing the water’s flow.