Gulf of Mexico
A great egret stands on a stump in Louisiana’s Atchafalaya Basin, which has been nominated to become the country’s 31st National Estuarine Research Reserve. Getty Images Sonja Jordan 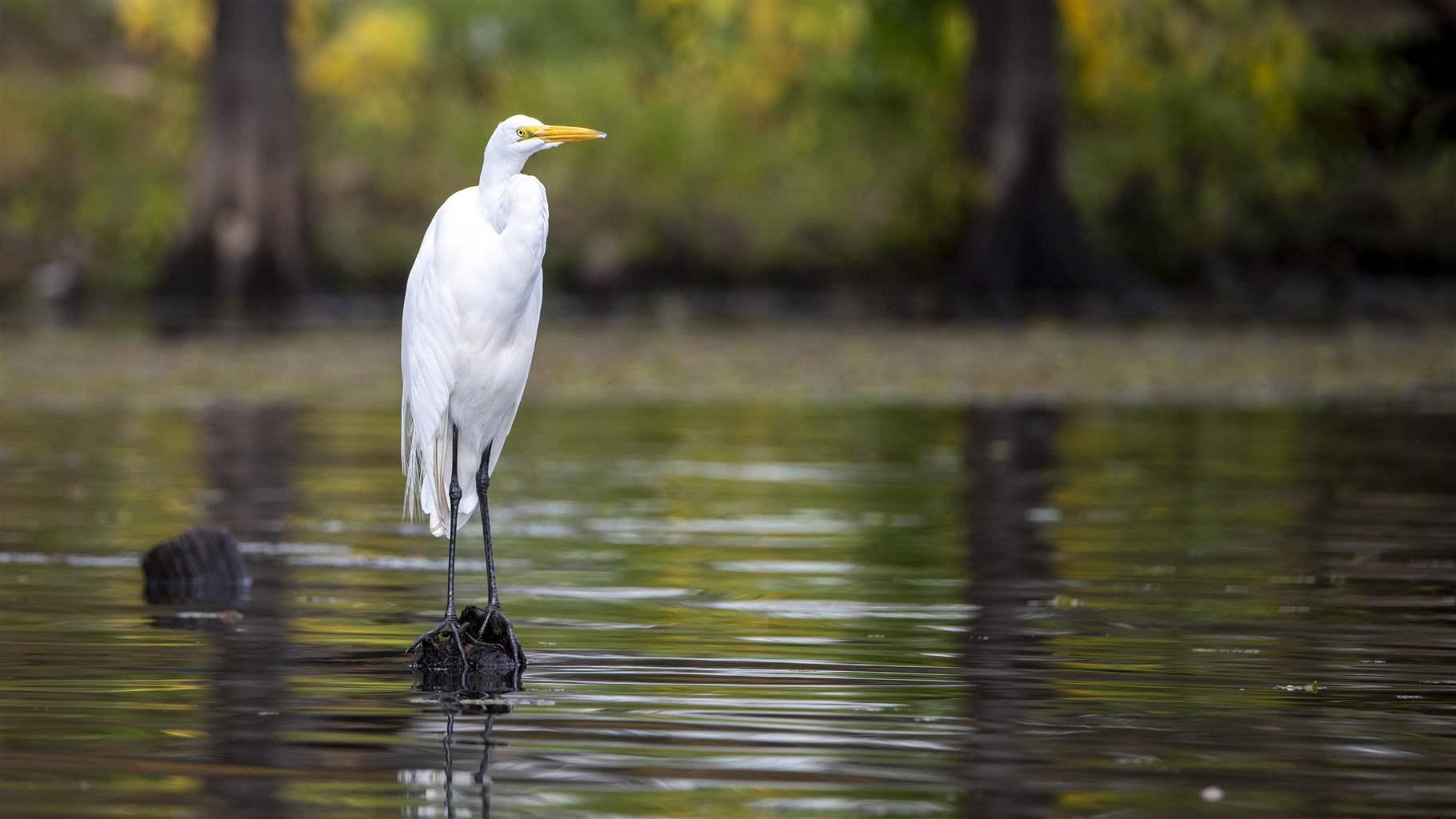 Designation would provide federal resources to protect and study the estuary

A portion of Louisiana’s Atchafalaya Coastal Basin, an area rich in plant and wildlife biodiversity and the site of two actively growing deltas, could soon gain federal designation as a National Estuarine Research Reserve (NERR). Louisiana Governor John Bel Edwards (D) is supporting nomination of a site within this 1 million-acre basin to become the state’s first NERR after a two-year process that considered three areas representing some of Louisiana’s most expansive and distinctive coastal landscapes.

The Pelican State has the fifth-longest coastline in the U.S. and the country’s largest area of coastal wetlands. It’s the only coastal state without a NERR. The reserves are designated by the National Oceanic and Atmospheric Administration (NOAA) and managed by the states with a goal of conserving estuaries—areas where freshwater flowing from rivers and streams mixes with ocean saltwater—and estuarine-like ecosystems for research, education, training, and stewardship. NOAA administers the reserve system nationally, with states and local entities overseeing day-to-day management of sites. All NERRs receive federal funding and technical support and are protected by state laws and regulations.

In a statement announcing the nomination, Gov. Bel Edwards said, “[T]he Atchafalaya Basin is home to a unique and cherished culture and history” along with “two active, land-building river deltas and an extremely vibrant estuary.”

The Atchafalaya Basin is larger than the Florida Everglades and is home to about 65 species of reptiles and amphibians; mammals including the black bear, otter, and muskrat; and more than 100 species of fish and aquatic life. The basin also serves as habitat and migratory flyway to more than 250 bird species. Its waters, in the heart of Acadiana, Louisiana’s Cajun Country, yield an estimated annual commercial harvest of nearly 22 million pounds of crawfish, a statewide delicacy.

To oversee the site’s designation and creation of the management plan at the state level, Gov. Bel Edwards selected the Coastal Protection and Restoration Authority (CPRA), which has five broad objectives: advancing coastal projects that reduce economic losses from flooding; promoting nature-based solutions to protect coasts; conserving and expanding coastal habitats; sustaining Louisiana’s cultural heritage by protecting its natural environment; and supporting “working coastlines”—places that support livelihoods—that are vital to the state’s economy. CPRA will continue to work closely with Louisiana State University, which has spearheaded the site selection process, to identify a specific site within the basin to be nominated to NOAA.

Due to industrial activity, changes in water flow, development, and climate change, Louisiana loses coastal islands and wetlands equal to the area of a football field every 100 minutes and has sustained more coastal land loss than any other state, according to figures derived from the U.S. Geological Survey. Since 1930, about 2,000 square miles of the Pelican State have turned to open water.

A Louisiana NERR would complement and extend scientific, educational, and stewardship activities already underway by federal, state, and academic programs, including those exploring the impact that climate change is having on the state’s disappearing coast.

“Louisianians are fiercely proud and protective of what their coastlines provide, notably their considerable economic, recreational, and cultural contributions,” said Seth Blitch, coastal and marine conservation director for The Nature Conservancy in Louisiana. “A NERR is a mechanism that allows the state to honor its historic way of life without imposing new regulations or prohibitions on residents and businesses.”