Gulf of Mexico
A photo taken with a drone shows downed trees in the Vernon Unit of the Kisatchie National Forest. The LSU AgCenter estimates that timber damage from Hurricane Laura totaled $1.1 billion. via U.S. Department of Agriculture Forest Service 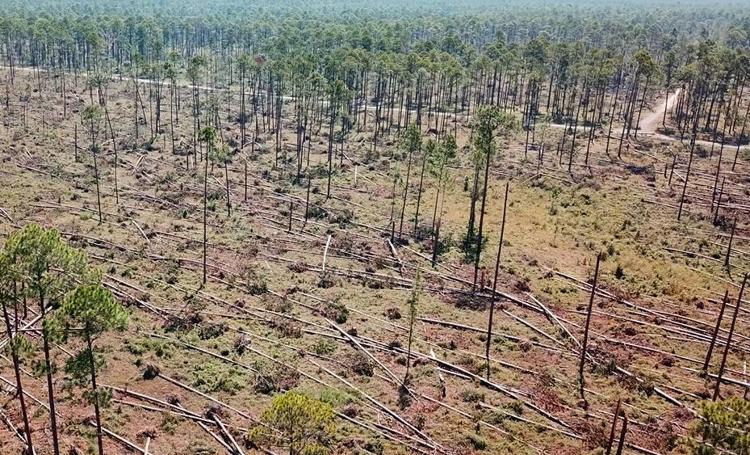 LA - At $1.6B, Hurricane Laura Did More Agriculture Damage in Louisiana Than Katrina and Rita Combined

Hurricane Laura caused $1.6 billion in damage to Louisiana agriculture, according to preliminary estimates from the LSU AgCenter.

By
Staff / The Advocate
Section:
Property
Region:
Gulf of Mexico

In comparison, agricultural losses — including forestry, crops and fisheries — from hurricanes Katrina and Rita in 2005 totaled $1.5 billion.

The storm did $1.1 billion in damage to the Louisiana timber industry. Laura devastated 757,538 acres of timber from the southwest to northeast parts of the state, according to a report by AgCenter economist Kurt Guidry and AgCenter forestry specialist Michael Blazier.

The losses caused by the storm are expected to increase once the Louisiana Department of Wildlife and Fisheries releases damage estimates for the fisheries industry.

Guidry said Laura will end up being one of the costliest storms ever for Louisiana agriculture.

“Based on the amount of infrastructure damage that occurred and the losses associated with timber, the total economic impact to the food and fiber sector from Hurricane Laura will be as large as or larger than any storm that I have developed estimates for since my time with the AgCenter,” he said.

From a timber standpoint, Blazier said, Laura appears to be the most devastating storm to hit Louisiana, even more destructive than Katrina and Rita combined. “It’s demoralizing. I checked and checked and rechecked the figures, and if anything, it’s conservative,” he said.

Using data from aerial surveys by the Louisiana Department of Agriculture and Forestry, Vernon Parish was estimated to have the largest economic loss of timber at $360 million on 160,416 acres, followed by Rapides, Beauregard, Grant and Allen parishes, all estimated to have timber damage exceeding $100 million.