Gulf of Mexico
Roishetta Ozane, a community organizer for the environmental group Healthy Gulf, questioned whether regulators were really listening to the communities’ concerns at an LDEQ hearing on Commonwealth LNG’s proposed export air quality permit. “We are not a climate sacrifice zone,” Ozane stated. Credit: Julie Dermansky 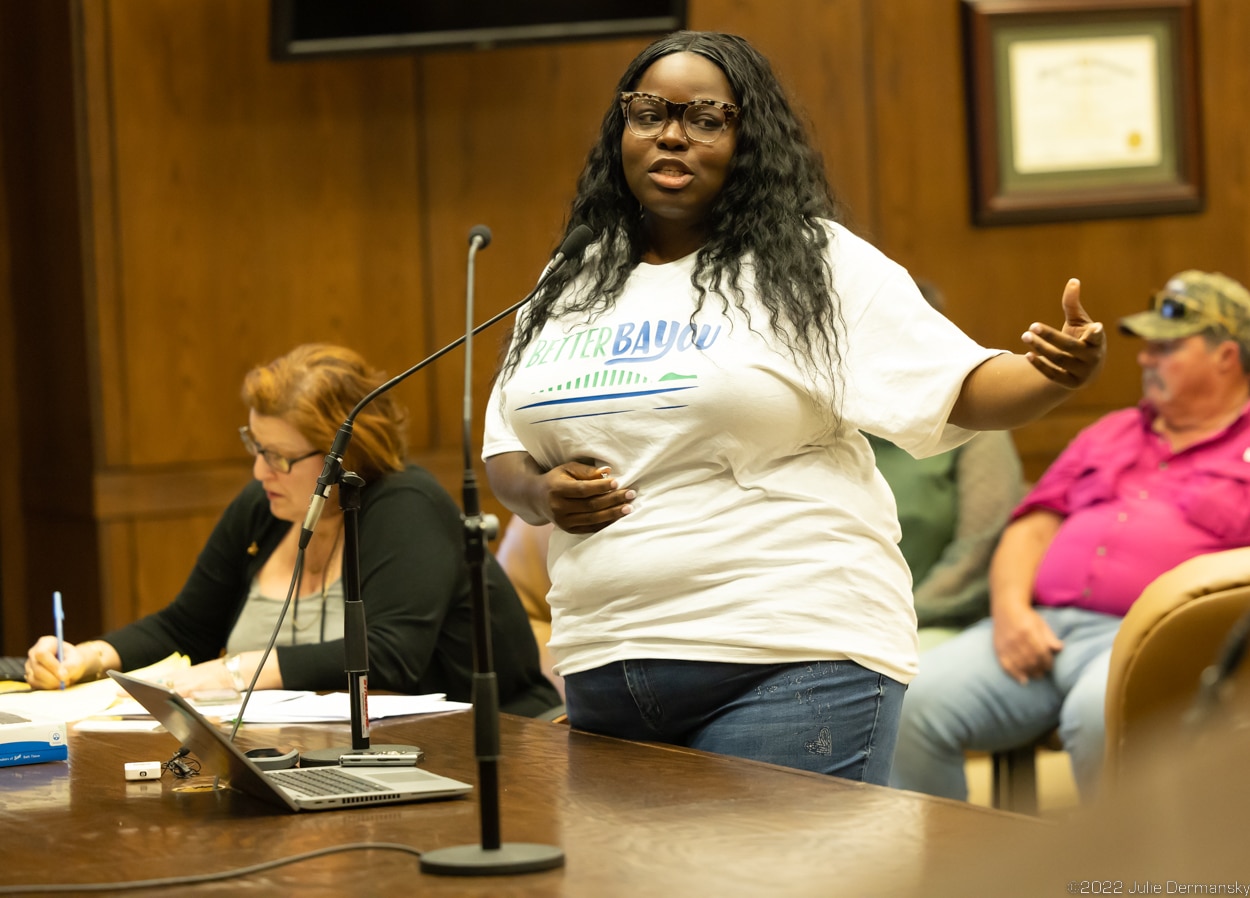 I live in South Louisiana on the front lines of the climate crisis and cover the fossil fuel industry and impacts related to the warming planet, so facing gaslighting is a regular occurrence for me.

So it resonated with me that Merriam-Webster dictionary chose “gaslighting” as the word of the year. This year saw a 1,740 percent increase in lookups for gaslighting, according to a post by the dictionary company, which defines gaslighting as “the act or practice of grossly misleading someone especially for one’s own advantage.” I would add to that, that gaslighting is a driver of disorientation and mistrust, and a common practice used by the fossil fuel industry — one that DeSmog is committed to countering by drawing connections to those funding misinformation.

Heerden is now a consultant specializing in environmental and coastal issues who analyzes recently approved permits for fossil fuel industry projects slated to be built in Louisiana, on behalf of his clients who are challenging the permits. He described the flaws he has found in multiple permits as glaring and plentiful, and views their approvals as a form of gaslighting by regulators.

“At best the permits minimize coastal erosion and gloss over storm surge and flood risks in relation to climate change,” he said. “Real science isn’t being used to guide their decisions.”

Heerden was hired by three Louisiana-based environmental groups — The Deep South Center for Environmental Justice (DSCEJ), Sierra Club, and Healthy Gulf — that are suing the Louisiana Department of Natural Resources for exempting Venture Global LNG from needing a coastal use permit to build a liquefied natural gas (LNG) terminal. Heerden recently filed an affidavit in conjunction with the case that alleges design flaws in the project’s proposed storm wall, which could lead to a levee failure. It also alleges that any major hurricane poses a risk of contaminants escaping from the proposed terminal.

Louisiana’s approach to tackling the climate crisis is steeped in cognitive dissonance. In 2020, Governor John Bel Edwards (D) joined the international Race to Zero Campaign, which aims to reach net zero carbon emissions around the world by 2050. This is despite Edwards’s continued support for numerous carbon emitting projects, including proposed LNG facilities and Formosa’s proposed petrochemical complex in St. James Parish, even after a judge revoked air quality permits issued by the state.

The landscape in South Louisiana around the holidays is ripe with juxtapositions that mirror the state’s approach to dealing with the climate crisis. Giant inflatable Christmas decorations, including polar bears and penguins wearing Christmas hats, grace yards — some of which still have tell-tale signs of damage from extreme weather events. Earlier this month, displays of Santas on sleds being pulled by alligators were often enveloped in fog, due to the abnormally warm temperatures that were replaced with a cold front that spurred tornados.