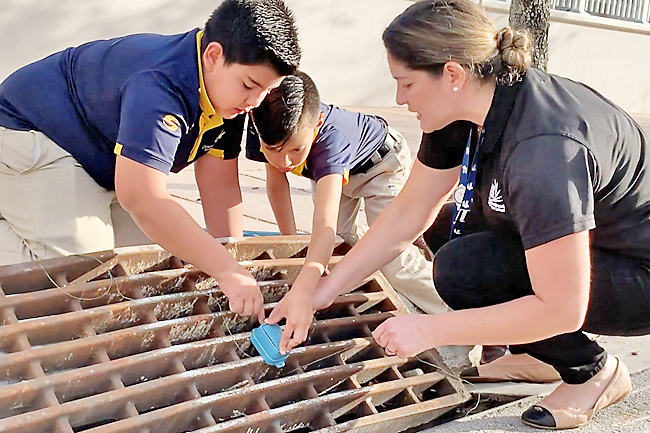 FL - Sixth-grade kids design a device to warn city workers when and where storm drains are clogged to reduce dangers of flooding.

In late May, storms flooded streets in Miami-Dade County in Florida. The floods made cars sink and turned roads into brown rivers.

A team of local middle school students has a plan to stop this ongoing problem.

Alyssa Neuber, Bianca Verri and Jose Pirela are sixth-graders at Downtown Doral Charter Upper School. They designed a device to warn city workers when and where there is a danger of flooding. The team is one of five grand-prize winners of the Samsung Solve for Tomorrow Contest. The contest asked for science, technology, engineering and math (STEM) solutions to the biggest challenge facing a school community.

“I’ve been living here my entire life, and all of us have encountered problems with flooding,” said Bianca. “We knew that was the problem we were going to tackle.”

Flash flooding can happen when storm drains get plugged up and, especially during hurricanes, overflow into streets. It’s the leading cause of weather-related deaths in the United States (US).

The students’ device uses a laser system called lidar, which stands for “light detection and ranging.” The device, if approved by the city government, could be attached to Doral’s 2,575 storm and manhole drains – one device per drain. If a drain gets clogged with sediment, the device could send a computer alert to the city’s stormwater management office. Then the stormwater manager could send someone to clean the drain.