International
via The Yomiuri Shimbun 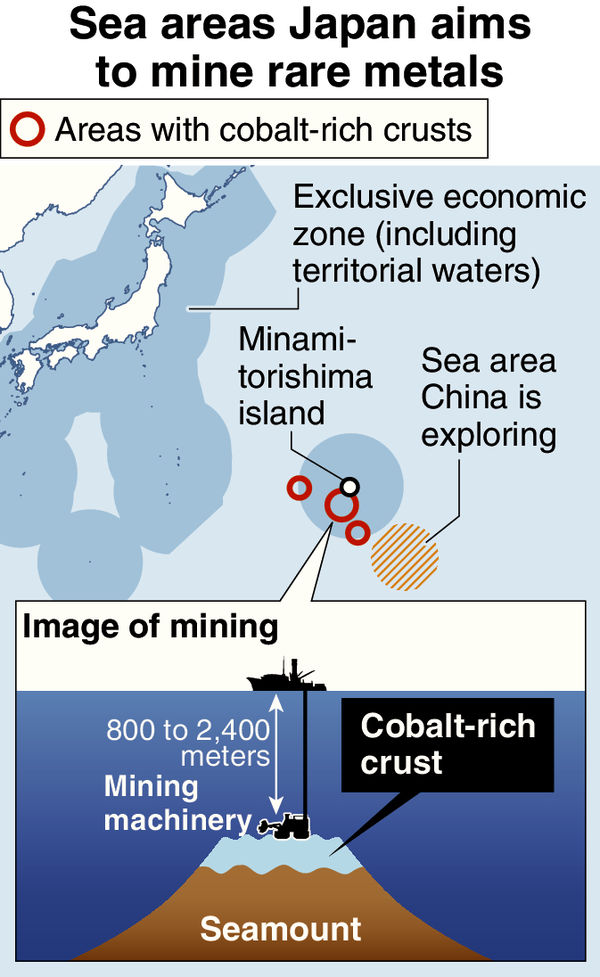 JPN - Japan to Commercialize Mining of Rare Metals on Seabed

The government plans to commercialize the mining of cobalt and other rare metals that are found on the seabed around Japan’s easternmost point of Minamitorishima island, part of the Ogasawara Islands administered by Tokyo, The Yomiuri Shimbun has learned.

By the end of 2028, the government will establish mining technology and decide where to mine in its exclusive economic zone. China is also increasingly interested in the abundant resources on the seabed around the island, so Japan aims to secure these mineral resources.

According to the Japan Oil, Gas and Metals National Corp. (JOGMEC), cobalt-rich crusts are widely spread on the seabed around the island. It is estimated that cobalt in the amount equivalent to about 88 years of domestic consumption and nickel of about 12 years are on the seabed in the area. In July, Japan conducted the world’s first successful excavation of the seabed at a depth of about 900 meters to the south of the island.

Demand for cobalt, which is used as a raw material for lithium-ion batteries such as those in electric vehicles, is expected to increase as Japan looks to become a decarbonized society. However, almost all cobalt is imported, and the Democratic Republic of the Congo, where armed insurgents continue to confront each other, accounts for half of the world’s total cobalt production of approximately 120,000 tons per year. Thus, Japan needs to secure a stable supply of the mineral.

From next fiscal year, which starts in April, the government will develop a machine equipped with a cutter to extract ore, among other equipment, and aim to establish technologies from mining to smelting. The cobalt-rich crusts near the island are located at a depth of 800 to 2,400 meters, so mining requires advanced technology.