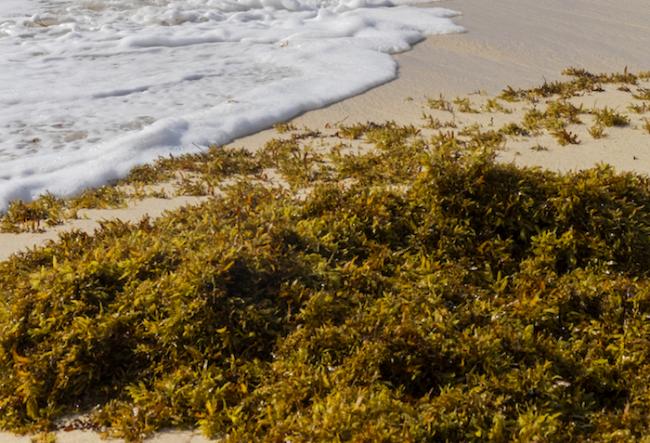 Jamaica - Rethinking Sargassum Seaweed: Could It Be the New Normal in Jamaica?

Blooms of smelly and unsightly sargassum seaweed have impacted the tourism industry across the Caribbean. Now, solutions must balance environmental factors and local livelihoods.

Every moonlit Sunday morning, George Williams sails his small yellow boat up to 50 miles off the coast of Port Antonio—the capital of the parish of Portland, a town of 15,000 on the eastern coast of Jamaica—to catch fish. These days. he fishes around Grapla’s Bank or Famigo’s Bank, two areas rich in sargassum. Williams, who has been fishing for 42 years, loves sargassum, or kelt as it is locally known, because the seaweed provides a fertile fishing ground for surface-water fish. These surface water fish or pelagic fish, include mahi-mahi (dolphin fish), tuna, jackfish, and blue marlin. They lay their eggs in the sargassum habitat and feed on juvenile fish species seeking refuge there. “Without the sargassum, fishing for pelagic fish will be difficult,” Williams told me as we were sitting seaside on driftwood as the waves gently hit the shores.

Sargassum is a type of brown marine algae with a leafy tree-like appearance that can break off and continue growing. This “floating golden rainforest” is home to many migratory species of juvenile fish, turtles, shrimp, young lobsters, and crabs. In the Caribbean, two species are common, Sargassum fluitans and Sargassum natans, which both float in the water, unlike other Sargassum species that are found on the ocean floor. The seaweed is most famously associated with the Sargasso Sea in the North Atlantic Ocean near Bermuda, where sargassum has long blanketed the calm waters. The first recorded reference to this seaweed was in 1492, when the abundant sargassum fooled Christopher Columbus into thinking he was approaching land, even though the Sargasso Sea has no shore. In 2009, however, a new concentration of sargassum formed a similar sea off the East Coast of Brazil as a result of a particularly large outflow of nutrients from the Amazon into the South Atlantic. This was due to rivers being affected by poor agricultural and waste disposal practices.

Sargassum is now wreaking havoc across the Caribbean along with Central America and Mexico, impacting the tourism sector, fisheries, and biodiversity. Abnormally warm sea surface temperatures caused by climate change in 2010, large nutrient flows from fertilizers, and oceanic circulation patterns led the Caribbean ocean current to carry the new sargassum bloom into the Caribbean. Since 2011, it has been washing up on shorelines across the Caribbean, accelerating beach erosion, stranding turtles, and choking seagrass beds and mangroves while it piles up, producing a toxic gas—hydrogen sulfide—and rendering beaches unusable. This poses a dilemma for Jamaica’s tourism industry, which relies heavily on white sandy beaches and crystal blue waters. Dealing with the problem, however, comes with challenges, given the seaweed’s importance in the marine ecosystem.