Caribbean
Ian Allen Sargassum washed up along the shoreline of Hellshire Beach in St Catherine. 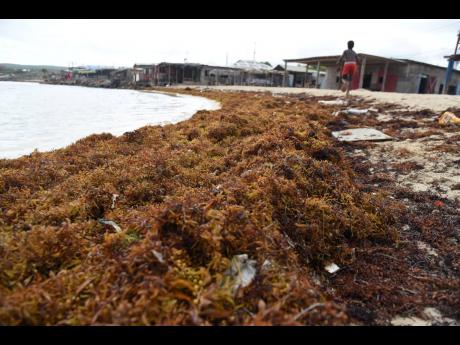 Those who feel that sargassum weed is nature’s curse being dumped on beaches across the Caribbean, may be comforted by new research which is touting this weed as a potential energy source.

What used to be small deposits of brown seaweed appearing two to three weeks annually, turned into a massive algae bloom in 2011, producing piles of murky, unsightly weed, lingering for months. The ill effects are felt by the entire region: from the Dominican Republic in the north, Barbados in the east, and Mexico in the west, with 2015 and 2018 posing the greatest challenge.

From the foul odour caused by toxic gases emanating from rotting algae to beach erosion, the impact on tourism, fisheries, several shoreline activities and biodiversity has been widely felt. For example, it was reported that in 2018, Caribbean tourism suffered a 35 per cent decline in bookings because of the sargassum problem. Barbados declared a national emergency that year.

The recent mysterious fish kill in Hellshire, St Catherine, has been blamed on the sargassum weed. The National Environment and Planning Agency (NEPA) confirmed what was well known. When sargassum decays, it produces hydrogen sulphide, which accounts for the unpleasant smell; it also expels vast quantities of carbon dioxide and methane, which can prove deadly for juvenile fish and crabs which seek shelter from predators in these weeds.

NEPA is now organising a clean-up of that beach.

Scientists are predicting that the sargassum phenomenon could become an annual event as warmer oceans struggle to cope with multiple threats. That is not good news for Jamaica and the region, because they are still in search of satisfactory control measures. So far, no one has come up with a solution. All efforts have been very costly, as clean-up activities have to be undertaken with due care so as not to risk damaging the beaches.