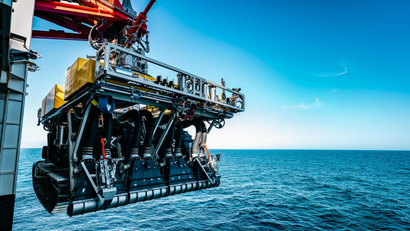 The International Seabed Authority (ISA) has authorized the first large-scale effort to scoop valuable metals from the Pacific sea floor, which could help speed the transition away from fossil fuels.The licensing process has come under scrutiny from critics who say the ISA isn’t doing enough to protect the environment or equal access to undersea riches.‍

The Metals Company, a Canadian firm that trades as TMC on the NASDAQ stock exchange, won the authorization through a subsidiary after years of work with the ISA. It hired Allseas, a Swiss undersea contractor, to deploy a prototype collector that will aim to vacuum fist-sized chunks of metal from three miles under the surface of the waves. This initial effort, characterized as a test, expects to recover 3,600 metric tons (3,968 tons) of metal.

These metal nodules were first encountered by sea-going cartographers in the 19th century, and later explored in the 1970s by oil companies. They were even the cover story for a secret US missionto raise a sunken Soviet submarine. They contain high concentrations of nickel, cobalt, manganese, and copper, all key to building the batteries and electrical systems required to decarbonize energy production. Demand for these substances is soaring along with their prices, but they are typically extracted by techniques like strip mining, with commensurate environmental damage, or alongside human rights abuses.

Pressure is on to start mining the deep sea. Is it worth it?, Yahoo Movies Canada / September 06, 2022

In 1994, the United Nations enacted the Convention on the Law of the Sea, which created the ISA and gave it control of undersea mining in international waters. The small agency, based in Jamaica, was intended to insure that lucrative mining claims would benefit poorer nations and be environmentally responsible. Its focus is the Clarion-Clipperton Zone (CCZ), a 1-million-square-mile area of seabed west of Mexico and southeast of Hawaii.

Questions about the first deal to mine metals in international waters

An investigation by the New York Times revealed that the ISA prioritized working with the private sector, even sharing restricted data on the seafloor with a firm that ultimately became The Metal Company through a troubled 2021 SPAC deal. Former ISA officials told the Times that the agency was understaffed compared to its mandate.

To win the right to mine in the CCZ, companies are supposed to partner with nations and share the profits. The Metals Company is working with three Pacific island nations: Tonga, Nauru, and Kiribati. While the details of their agreements are not public, the Times cites one claim that it will pay $2 per metric ton to its sponsors, equal in value to about 0.5% of the billions of dollars of metals it is promising to recover for investors.

And scientists say that too little is known about the ecosystems deep under the sea and what kind of life they harbor. A first-of-its-kind 2018 expedition to the CCZ sponsored by the University of Hawaii found hundreds of different animals, some of which were new species. Hundreds of scientists have signed a letter calling for a moratorium on this kind of mining.

Under the ISA’s authorization, The Metals Company’s first expedition will be independently monitored by ocean scientists, who will analyze the impact of the mining submarine and the machinery used to raise the metals to the surface processing ship, the Hidden Gem. Their assessment will be used by the ISA to determine if full-scale mining is warranted.

The Metals Company says that deep-sea mining for these metals will be more environmentally-friendly than the techniques used to extract these metals from the surface of the Earth, and less likely to exploit workers. It argues that the effects of climate change on the ocean are likely to be more destructive than mining in these restricted areas.

As the first real effort to mine the sea floor, this expedition will be closely watched not just by critics, but by other countries and companies interested in exploiting their own claims in the CCZ.