International
via Landsat data from the U.S. Geological Survey 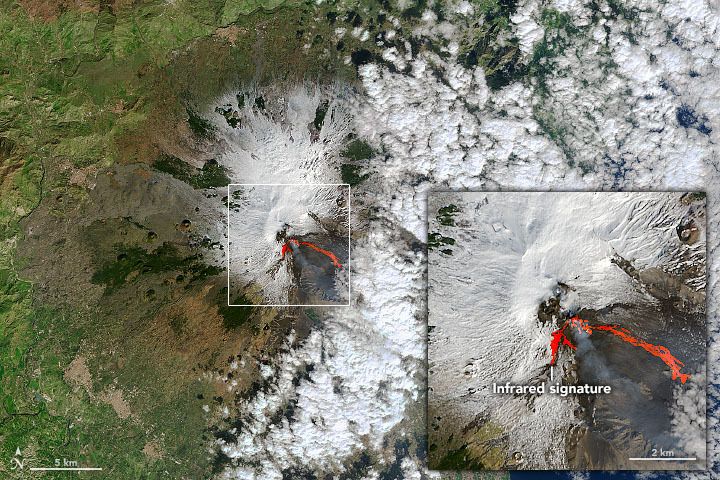 Mount Etna has been spewing lava across Sicily for weeks during a series of eruptions captured by a slew of Earth-orbiting satellites.

Etna, the most active volcano in all of Europe, has been in a state of eruption since 2011. The latest series began on Feb. 16. The volcano erupted that day, again on Feb. 18 and then again between Feb. 20 and 23. During these eruptions, fountains of lava shot high into the night sky, reaching 0.4 miles (0.7 kilometers) high earlier in the month and getting 0.9 miles (1.5 km) over the volcano's summit later in the month.

These most recent eruptions "were among the most violent in the Southeast Crater's young history," Marco Neri, a volcanologist with Italy's National Institute of Geophysics and Volcanology, said in a NASA statement.

Earth-observing satellites were keen to check out the smoke, ash and lava flung out by the volcano. On Feb. 18, the Operational Land Imager (OLI) on the NASA-U.S. Geological Survey Landsat 8 satellite snapped a natural color view of the volcano, which was overlaid with infrared data to show the warm areas (or spots where lava had broken through).

Also on Feb. 18, the European Space Agency's Copernicus Sentinel-2 mission, which is made up of two satellites, observed the eruption. The European satellites captured a moment that, using infrared imaging, showed the lava in bright orange and red.